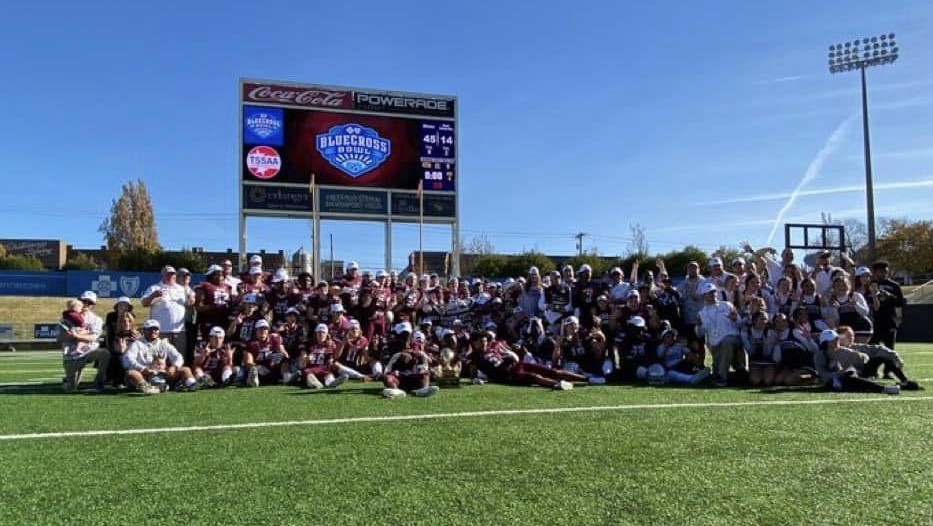 Believe it or not, however, Alcoa is only halfway to breaking the nation record of consecutive state titles, as St. Louis from Hawaii won 14 straight from 1986 through 1999. South Dakota’s Sioux Falls Washington has also been credited with 14 straight from 1951 through 1964, but during that day and age, many of those titles were viewed as mythical.

Regardless, Alcoa seemingly has a stranglehold on Class 3A and would almost certainly own the nation’s longest win streak (50 by Riverheads HS in Virginia) if not for Class 6A cross-town foe Maryville. 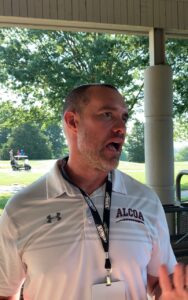 For the first time in 17 years, however, the Tornadoes will be spearheaded by a new, yet familiar face. Brian Nix has been an assistant at Alcoa since 2002, dating beyond former head coach Gary Rankin’s tenure. Nix served as Rankin’s defensive coordinator for the majority of his tenure and now gets to run the show at one of the top programs in Tennessee.

“Complacency is the enemy for anybody who has success,” said Alcoa head coach Brian Nix. “There are a ton of books about achieving success, but I’ve not seen any books about sustaining success. We hired a new coach and I said, ‘We need to get used to winning by 40 and people not being happy.’ It’s not about that end result of the game, but it’s about how did we play and are we better than last week. For me, it’s that incremental progress that’s so important to avoid that sense of complacency.”

Zach Lunsford looks poised to man the duties under center, as standout quarterback Caden Buckles graduated in May. Lunsford started several games as a sophomore in 2020, before Buckles became eligible and led the Tornadoes to a state championship and was named MVP of the state title game. The rising senior waited it out, rather than transferring, and it is now his time in the spotlight for the Tornadoes.

If history is any indication, Lunsford will be able to put his name alongside many recent Alcoa quarterbacks to lead his team to a state championship.

“I’m excited for Zach, just because he sat his entire junior year behind Caden and worked as a backup quarterback, when he could have gone to a lot of programs and been the starter and in this day and age, that’s usually what happens,” Nix said. “Sometimes the hardest thing to hold onto is a backup quarterback and I think that’s true and the fact that Zach didn’t do that and didn’t talk about leaving — stayed in our program as a backup — you want to see him have success and reach his potential.” 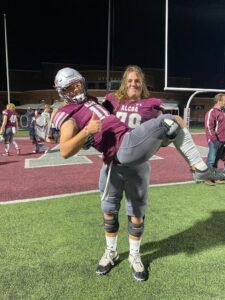 Lineman Lance Williams (79) celebrates a win with quarterback Zach Lunsford (11) during the 2021 season.

Senior running back Jordan Harris and junior Elijah Cannon will likely split the load in the backfield behind Lunsford. Harris ran for 490 yards and seven touchdowns in 2021, while also tallying 223 yards receiving.

Harris and Cannon will run behind a strong offensive line, which is anchored by Virginia Tech commit and two-time state champion wrestler Lance Williams. The senior standout was named 2021 All-Region 3A lineman of the year and should be in line to earn that honor again in 2022.

Nix mentioned that Williams is often the spark that his team needs during practice or workouts and praised the senior’s ethic, attitude and fun-loving nature.

“Lance is an energy guy,” Nix said. “Lance likes playing football. I think a lot of guys play football because they’re good at it, but he likes the game. He’s a high energy guy and he’ll play some both ways because he’s physically and mentally able. He’s a wrestler and has never lost a high school wrestling match. He’s a tough and likeable kid. Lance has never had a bad day. He brings a lot to your team because he just plays really hard.”

Senior Aaron Davis will lead Alcoa defensively, as he 59 tackles, four tackles for loss, three forced fumbles and a touchdown on a defense that allowed just under nine points-per-game.

“He’s the guy that kind of makes things go over there and Joe McCord that should have a big year for us,” said Nix. “In the secondary, Jordan Harris, and Eli Graf, a rising sophomore, is a guy that can be a good player on both sides of the ball for us.” 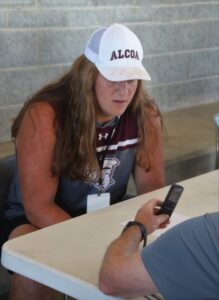 Another point of emphasis Nix mentioned was special teams, as the Tornadoes wreaked havoc and formed multiple turnovers on punts and kickoffs in 2021. Senior kicker and soccer standout Bacon Lauderback is also back for another season.

“We always try to do well on special teams,” Nix said. “Everybody talks about it, but I think, really in high school football there’s a lot of room for error if they don’t address special teams like they need to. We always look, against an evenly matched team and say, ‘how are you going to get an edge?’ Bacon Lauderback coming back, a guy who had never played football until Week 1 and comes in against West and hits a PAT that if he would have missed, it would have gone to three overtimes, so that showed me a lot about him. He will definitely help us in the kicking game.”

Alcoa will kick off the 2022 season on Friday, August 19th at 5A Rhea County, a team it defeated by a score of 41-13. Obviously, the early stretch of games will include a Thursday night bout with a young and talented Gatlinburg-Pittman team, as the Tornadoes look to be rounding into form for the Maryville game on September 9th.

“The Maryville game is big because it’s big to our kids and to our community,” Nix lamented. “In the grand scheme of things, the goal of our program is to win the state championship and to be the best team that we can be. That game against Maryville is especially important. It’s like the Army-Navy game.”