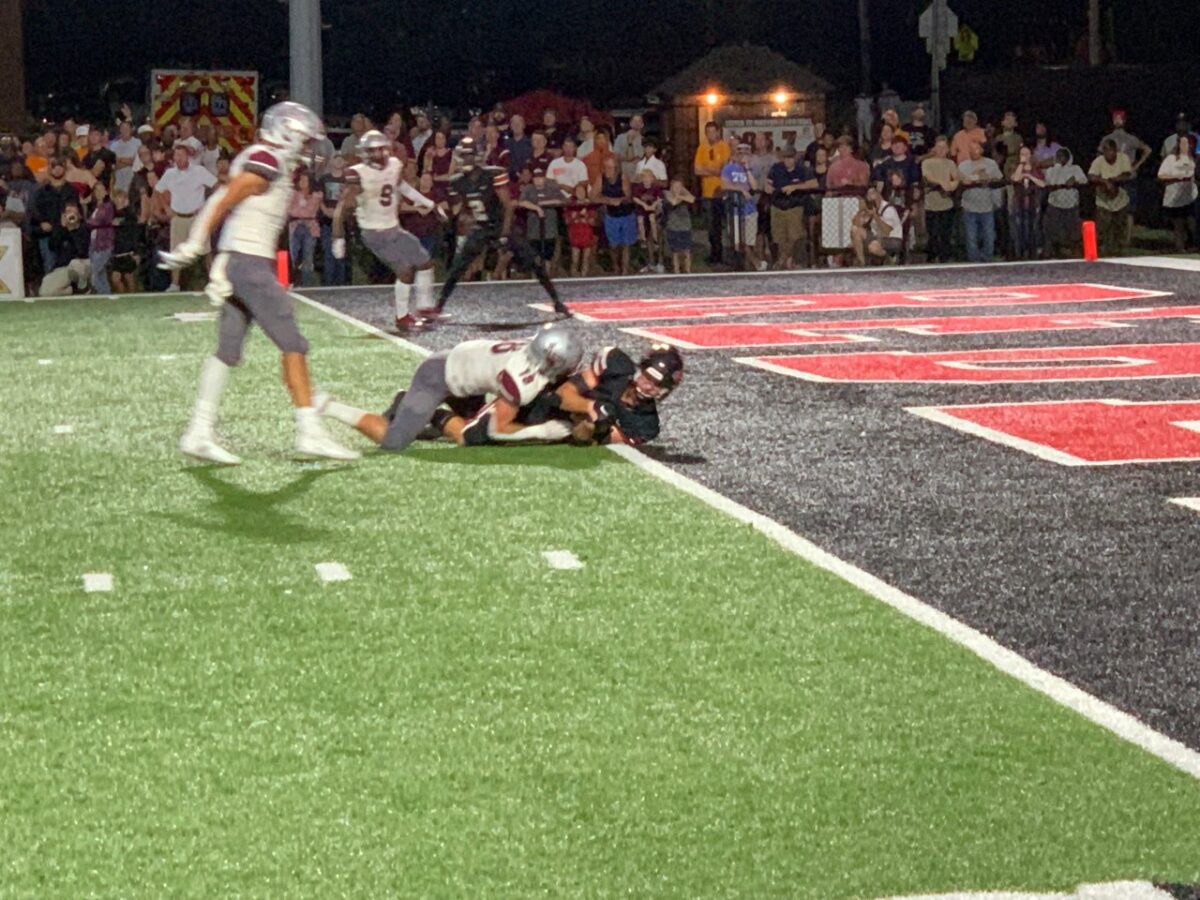 MARYVILLE – Brian Nix became the first Alcoa head coach to win the Battle of Pistol Creek in his first try since Scott Meadows did it in 2000, as the Tornadoes went into Maryville and came away with a 27-14 win Friday night.

The Rebels had an opportunity to win the game late, but Jordan Harris came away with an interception return for a touchdown, as Maryville was driving deep into Alcoa territory. 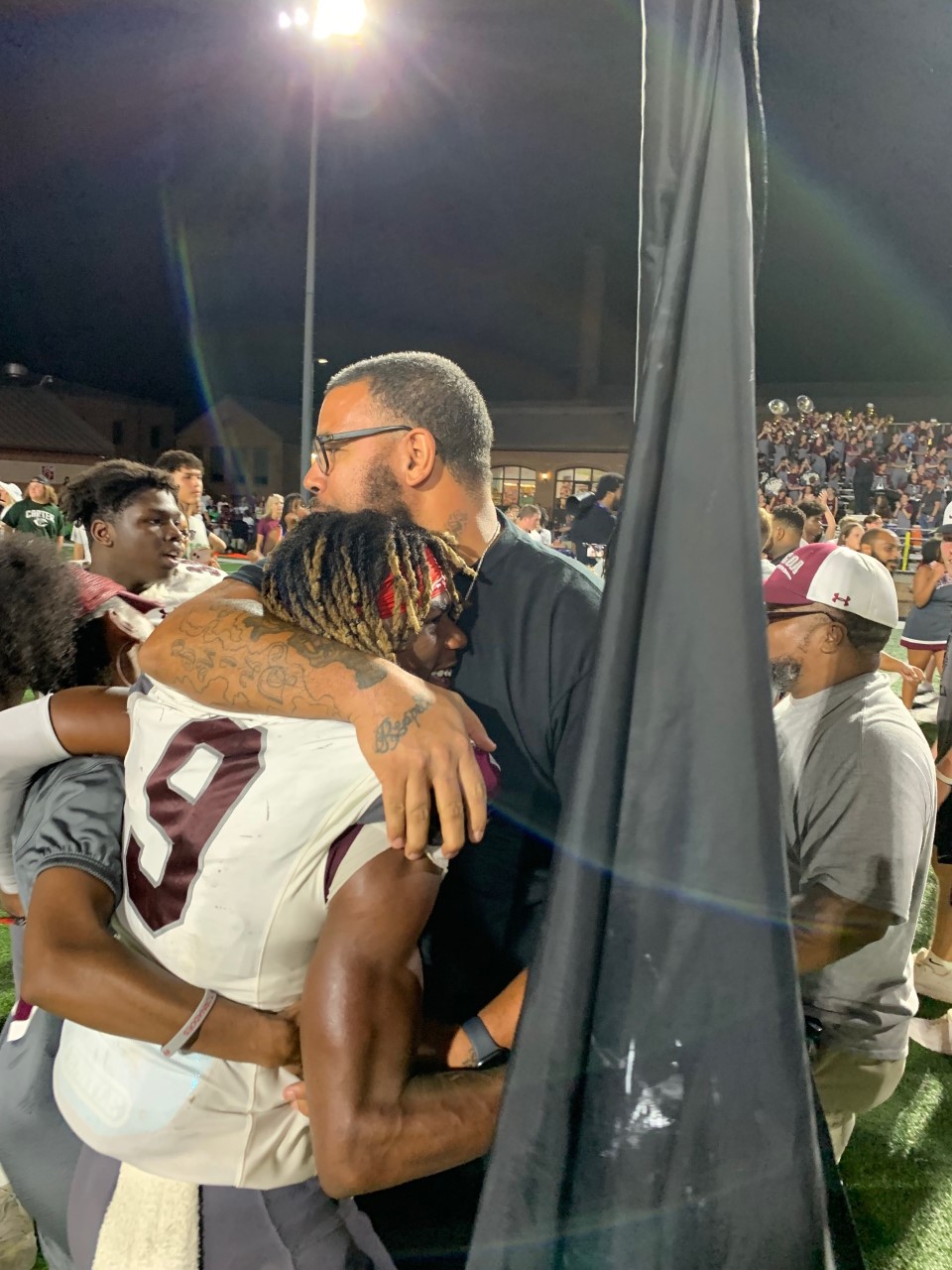 Jordan Harris (9) celebrates after the Tornadoes’ 27-14 win over Maryville. The senior scored on a pick-six that sealed the game with three seconds left. Photo by Brian Hamilton

“I’m so proud, once again just with their character,” Nix said after the game. “They’re just good kids. I was telling somebody the other day that we don’t have any grade issues out of these seniors, we haven’t had any off the field issues. We’re not checking on teachers or worried about checking their grades, so I think that wins. Talent is enough until you face another talented them and then your character comes in. You’ve got to have character to have a chance.”

“It feels great,” Alcoa’s Jordan Harris said after the game. “We thought we were going to beat them last year and it didn’t happen, but this year, it feels way better.”

Maryville jumped on the board first, as UVA commit Noah Vaughn took a snap from center on 4th-and-3 and went around the right end for a 56-yard touchdown run with three minutes left in the first quarter.

Alcoa would answer early in the second quarter, however, as Zach Lunsford found Brennen Duggan for a 2-yard touchdown throw, tying the game at 7-7 with 8:11 left in the half.

A 32-yard touchdown run by Harris would put the Tornadoes ahead 14-7 at halftime. Maryville came out and responded in the third quarter, however, as the Rebels offense put together 15-play drive, spanning 8:10, capped by a 4-yard pass from Matthew Clemmer to Caleb Graham for a touchdown, tying the game at 14-14.

Brayden Cornett intercepted Clemmer early in the fourth quarter, but Alcoa stalled in Maryville territory and had to punt the ball away.

It appeared the game may end up decided in overtime, but Alcoa manufactured a nice drive later in the fourth, which resulted in a 4-yard touchdown by Elijah Cannon. The extra-point by Bacon Lauderback was blocked, leaving the Tornadoes with a 20-14 lead with 2:54 remaining. 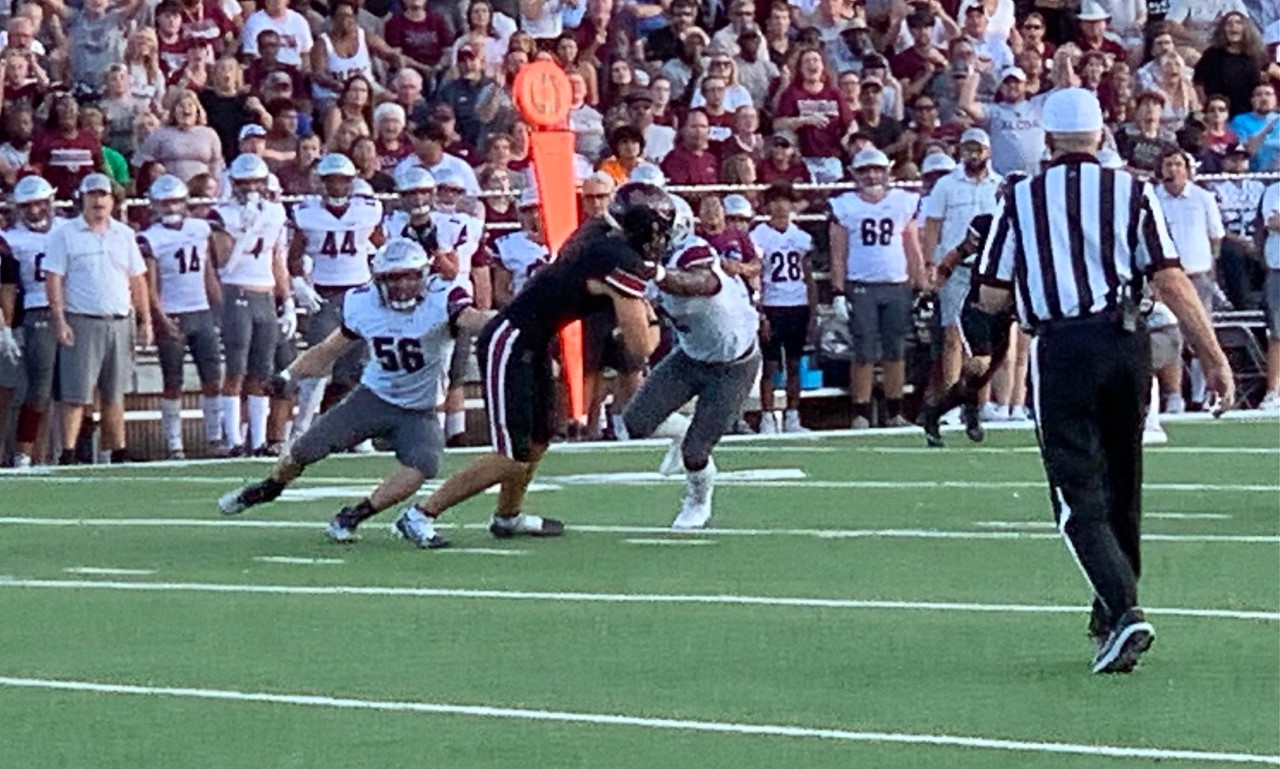 It appeared that Alcoa had Maryville stopped on 4th-and-9 with just over a minute remaining in their own territory. Clemmer was able to convert though, keeping the Rebels’ drive alive.

A pair of sacks by Joe McCord and Elijah Cannon put Maryville in a fourth and forever situation with no timeouts and the clock ticking under 30 seconds. Clemmer looked to the right side of the field and heaved it long. The only problem was that the ball found the hands of defensive back Jordan Harris and Harris had room to run.

About 10 seconds and 82 yards later, Harris was in the end zone and Alcoa had all but secured the victory, as only 3.7 seconds were left on the clock. The Tornadoes’ sideline erupted with jubilation, while the Maryville sideline was stunned in disbelief.

“There was nothing but green in front of me,” Harris said of the interception. “I knew I was scoring, and I knew nobody was catching me.” 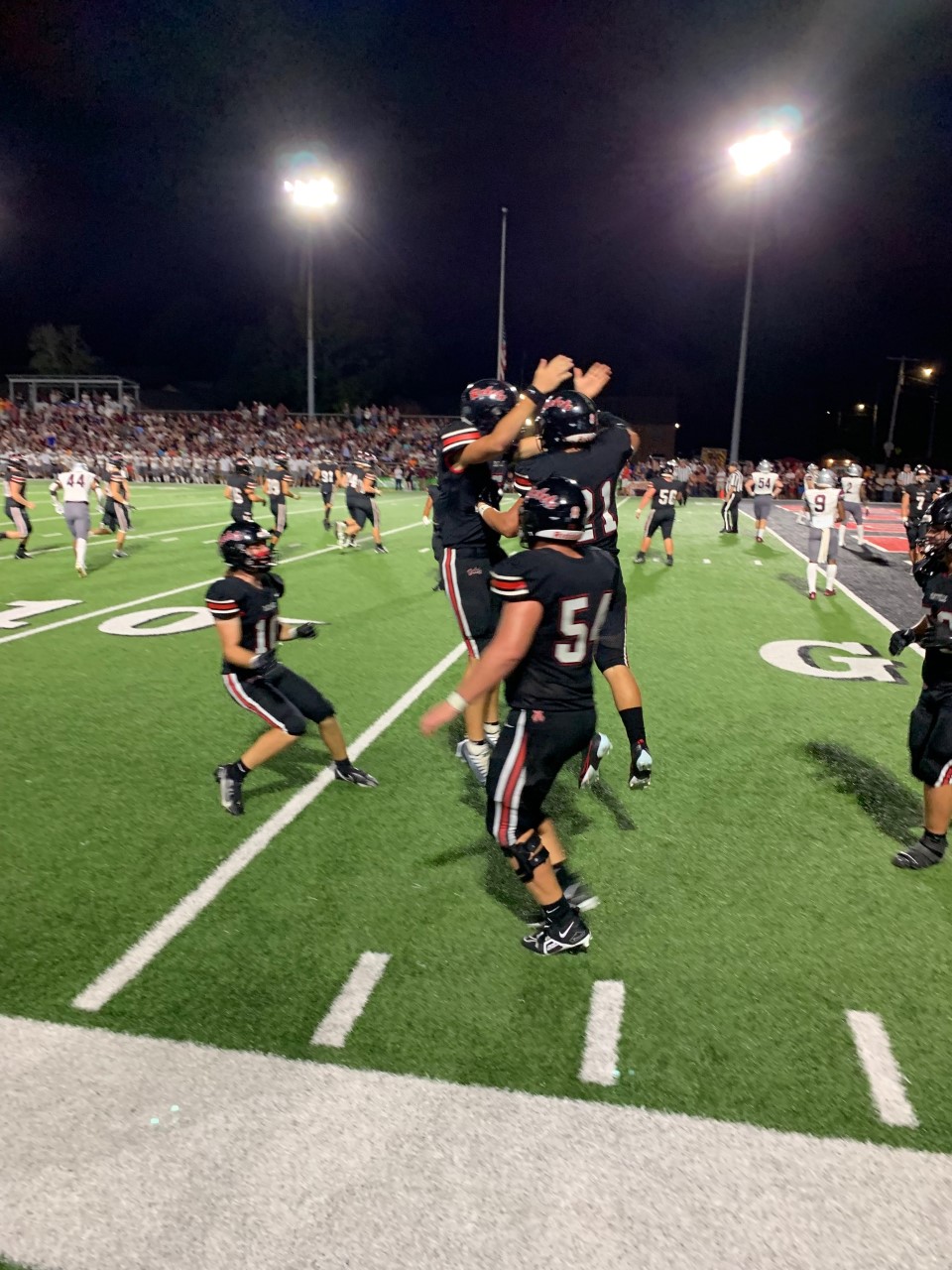 Matthew Clemmer and Caleb Graham celebrate after a touchdown that tied the game at 14-14 in the third quarter. Photo by Brian Hamilton

The Rebels were going to fall to their cross-town rivals for the first time since 2018 and it was starting to sink in.

“Hats off to Alcoa, first of all, their kids deserved it,” Maryville head coach Derek Hunt said. “Obviously, I was disappointed. We’d like to have some calls back. We just weren’t ready to play in the first half and that’s my fault. We had some opportunities to get leads and we couldn’t do it and that game in the second half came down to one or two plays. It’s just a tough way to lose right there, man.”

Harris finished the game with 94 yards of total offense, both rushing and receiving, to go with the pick-six. The senior also caught a deep pass from Lunsford on third-and-long late in the game, which set up the scoring run by Cannon.

Lunsford finished the game with 159 yards and a touchdown on 10-for-13 passing, while rushing for 32 yards as well.

Vaughn finished the game with 170 yards rushing and one score, but outside of the 56-yard touchdown run early on, the senior running back had a tough time finding daylight.

Clemmer was held to just 121 yards and one touchdown on 14-of-22 passing, along with two costly interceptions in the fourth quarter.

Maryville (3-1) will try and rebound next week against a good Bearden team that is 3-1 and coming off a big win over South-Doyle. The Rebels defeated Bearden 42-6 in 2021.

Alcoa (4-0) will host Pigeon Forge (1-3) on Friday, as the Tigers are coming off a 19-0 loss to Sevier County. This matchup was not played during the regular season last year due to Covid issues, but the Tornadoes trounced Pigeon Forge 52-0 in the Class 3A quarterfinals.