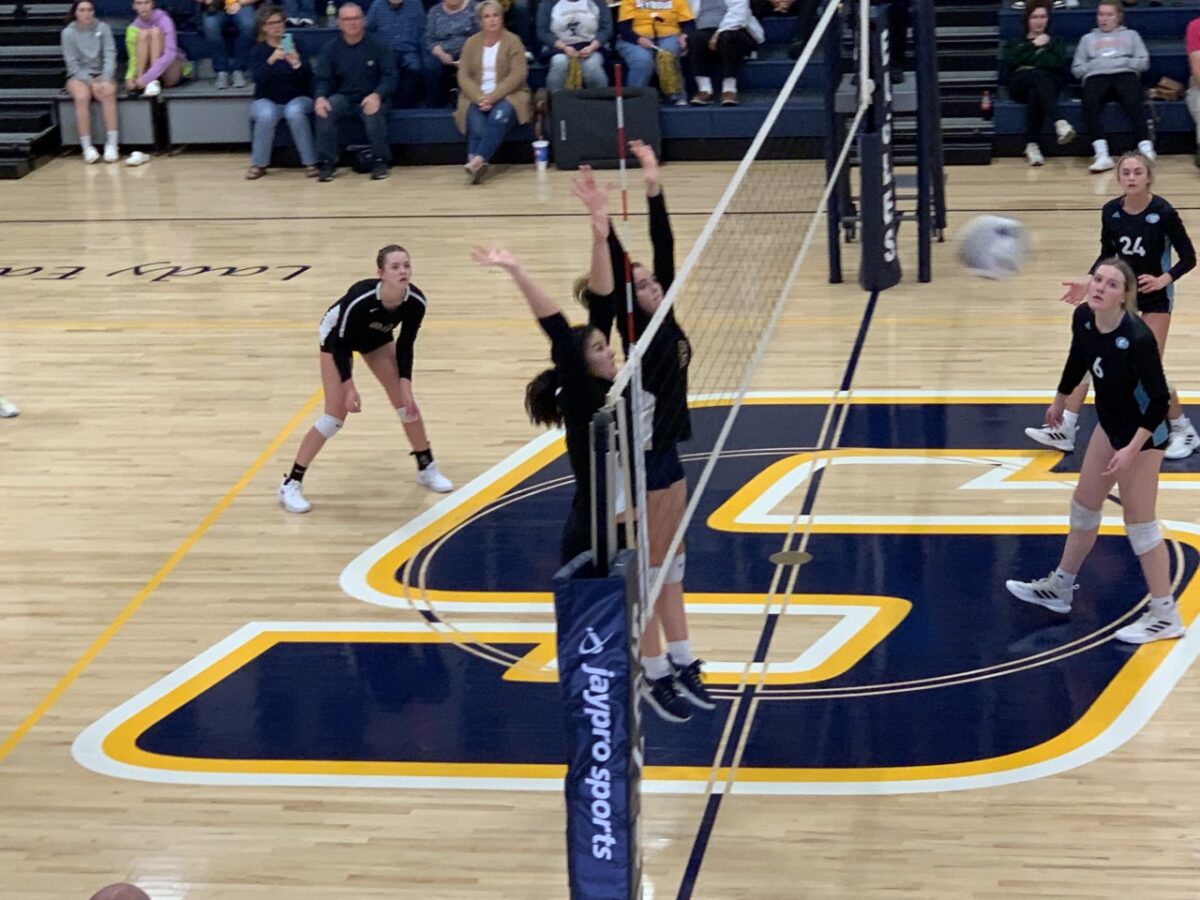 SEYMOUR – The Lady Eagles responded with a win after each defeat Monday evening, but Seymour was just unable to must up enough plays to send them to the regional final, as Gibbs won the final set 15-4 and took the match 3-2, ending the Lady Eagles’ season. 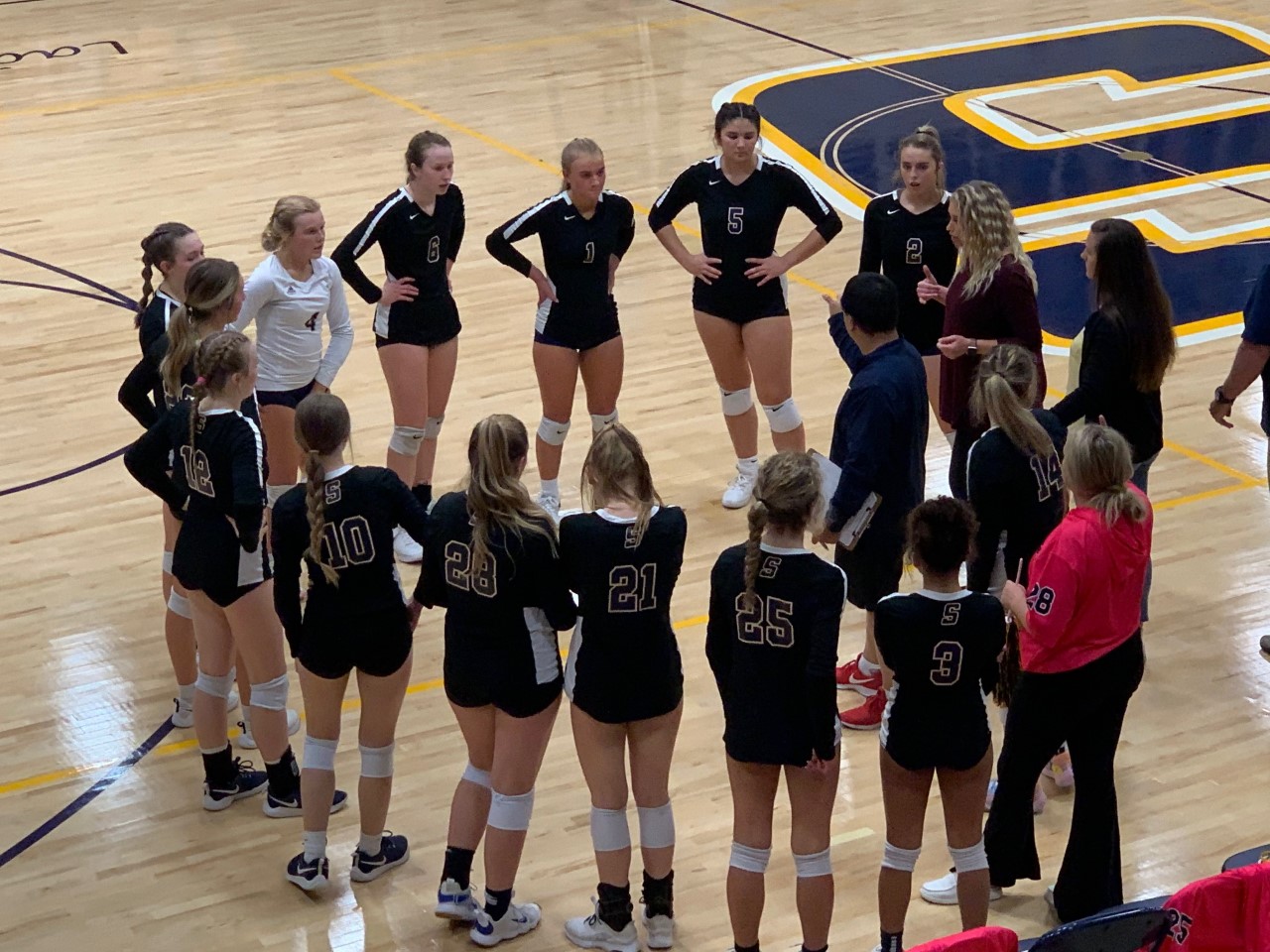 Gibbs took an early 3-0 lead in the first set, but Kaylyn Jarvis gave the Lady Eagles their first point. Seymour was then able to tie the set at 4-4 after trailing 4-1. The first set was neck and neck from that point forward, as Bailey McCoy made a kill to put the Lady Eagles up 6-5 and Jaden Cummings scored to break another tie, putting Seymour ahead 10-9.

The home Lady Eagles then went on a run, taking a 14-11 lead with Cummings serving. Gibbs would come back to knot the game at 17 apiece, however, as McCoy made a kill to tie the game.

Seymour led 20-18, but Gibbs came back to tie the game at 20-20 when Cummings hit one into the net. A net violation and a hit out of bounds forced a timeout, as the home Lady Eagles now trailed 22-20.

Trailing 23-21, Seymour managed to tie the game at 23 apiece, as Jarvis volleyed the ball off a Gibbs player’s head for the tying point.

Gibbs’ Maddie Tackett hit a nice spike to put the visiting Lady Eagles ahead 24-23 and Gibbs would finish off Seymour with the set point, winning 25-23.

The second set saw Seymour fall behind 22-16, but the Lady Eagles managed to win the game in extended serves 28-26, as each team must win by two points.

Seymour jumped out to an early 5-3 lead, but Gibbs would tie the game at 6-6 before a spike by McCoy made it 7-6 in favor of the home Lady Eagles.

The set remained tight throughout the first half, as Cummings hit one over the net to put Seymour ahead 11-10. Gibbs went on a run from there, however, as the visiting Lady Eagles jumped out to leads of 15-11 and 17-13. 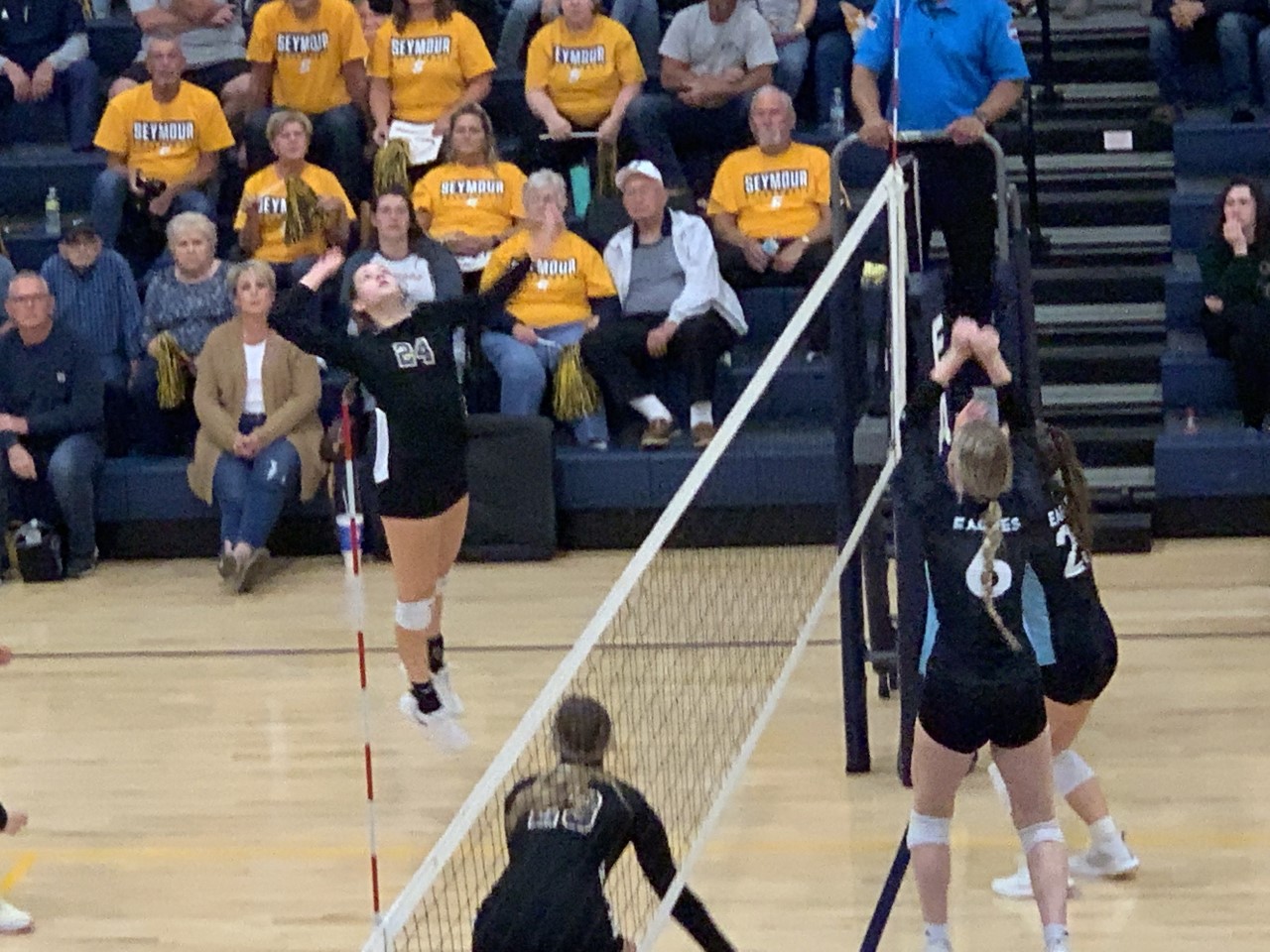 Seymour’s Jaden Cummings (24) goes for a spike against Gibbs during the Lady Eagles’ regional semifinal loss on Monday. Photo by Brian Hamilton

Tackett had a kill for Gibbs that made the score 19-15 and it looked as if Seymour would fall down 2-0, as the Lady Eagles trailed 22-16.

A shot by Gibbs’ Ella Brannan put the visiting Lady Eagles in front 25-24, but McCoy would soon tie the game at 26-26 and a kill by Cummings put Seymour in front 27-26. The home Lady Eagles would win the game on a lift violation on the next serve, tying the match at 1-1.

The third set was all Gibbs, as the visiting Lady Eagles went on a 14-2 run after the set was close early to win 25-8.

Gibbs went ahead 2-0 early on, but Seymour managed to take a 4-3 lead on a kill by Jarvis. Arley Shehan hit the ball into the net on the next play, however, which tied the game at 4-4 and gave serve back to Gibbs.

The visiting Lady Eagles then promptly went on a 14-2 run that saw a 4-3 Seymour lead balloon into a 17-6 deficit.

Seymour trailed 20-7 after McCoy hit the ball out of bounds and Gibbs would cruise to a 25-8 win and a 2-1 lead in the set, forcing the home Lady Eagles into an elimination set.

For Seymour fans, the fourth set was just as exciting as the second set, as the Lady Eagles jumped out to a 6-3 lead before Gibbs stormed back to tie it at 6-6. 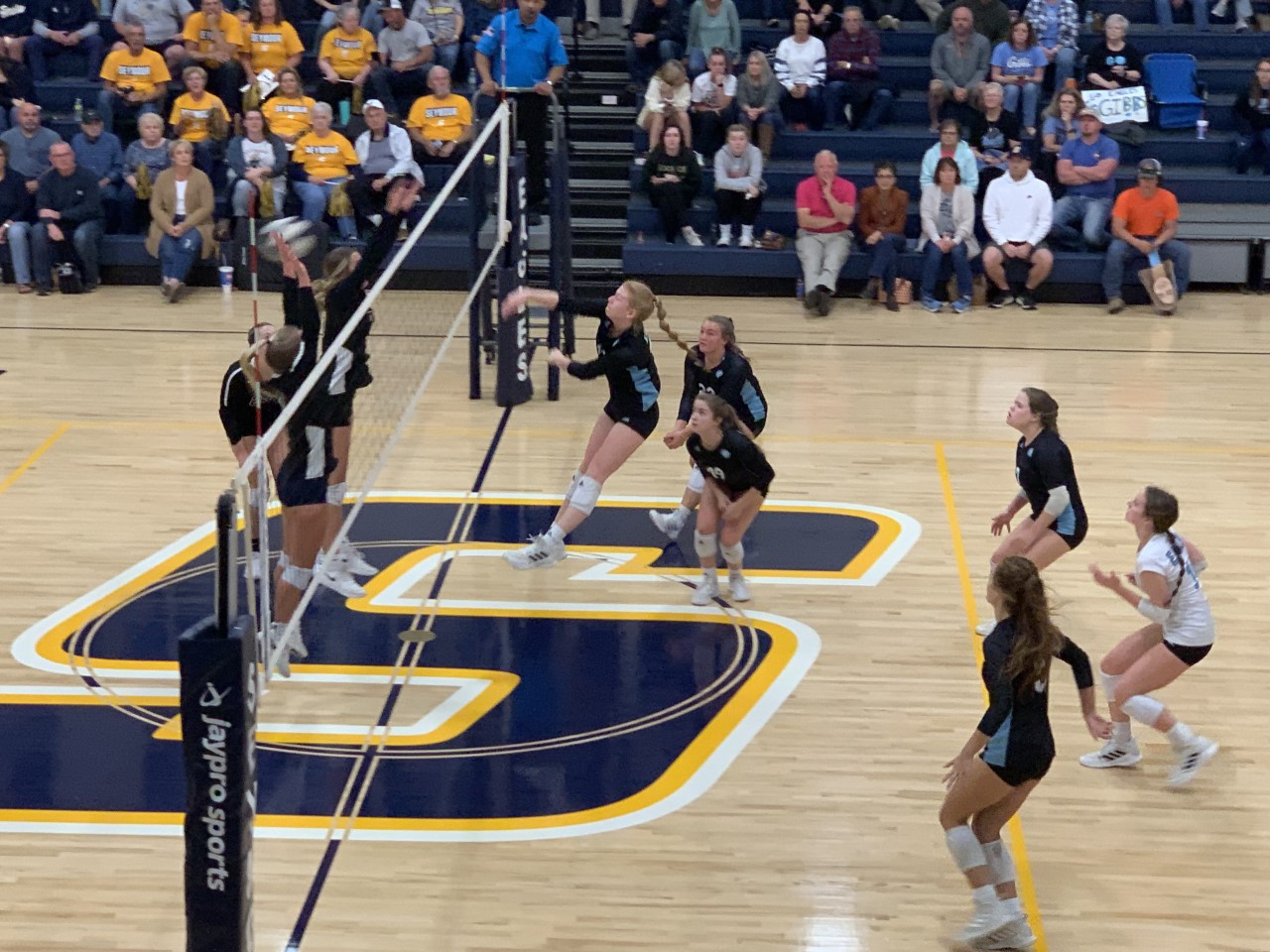 Gibbs’ Jadyn Parker (12) sends one over the net, while Seymour defenders try for the block. Photo by Brian Hamilton

Seymour then dug deep and scored four consecutive points to pull to within 17-16 and later tied the set at 20 apiece. The Lady Eagled went ahead 22-21 when Gibbs hit the ball out of bounds, but a net violation on the next serve would tie it up again at 22-22.

Gibbs hit it out of bounds on the next serve, giving Seymour a 23-22 lead and forcing a timeout by the visiting Lady Eagles. Seymour held strong coming out of the timeout, however, holding serve and winning the set 25-22 to force a winner-take-all fifth set.

To advance to the title game on Tuesday night, Seymour would have to do what neither team had been able to do all evening: win consecutive matches.

The Lady Eagles were unable to do that, however, as Gibbs got off to a fast start in the abbreviated fifth set and won 15-4 to stay alive in the playoffs.

Seymour came out with a promising 2-0 start, but Gibbs quickly tied the game at 2-2. From there, the visiting Lady Eagles went on a 9-0 run that gave them a 9-2 lead.

Cummings finally got one over the net and to land, to make the score 9-3 and return serve to Seymour. Gibbs hit one out of bounds to make the score 11-4, but Seymour would never score again, as Gibbs ran off four straight points to win the set 15-4 and the match 3-2.

Gibbs defeated Seymour in the regional semifinals for the second consecutive season and Lady Eagles head coach Kasey Norman had little words after the game.

“They put us out last year,” Norman said after the game. “I don’t know what to say, I am so frustrated.”

Norman could not be reached for comment on Tuesday morning.

Seymour sees its season with a record of 12-9, while Gibbs will go on to face Anderson County in the Region 2 final at Seymour on Tuesday night.