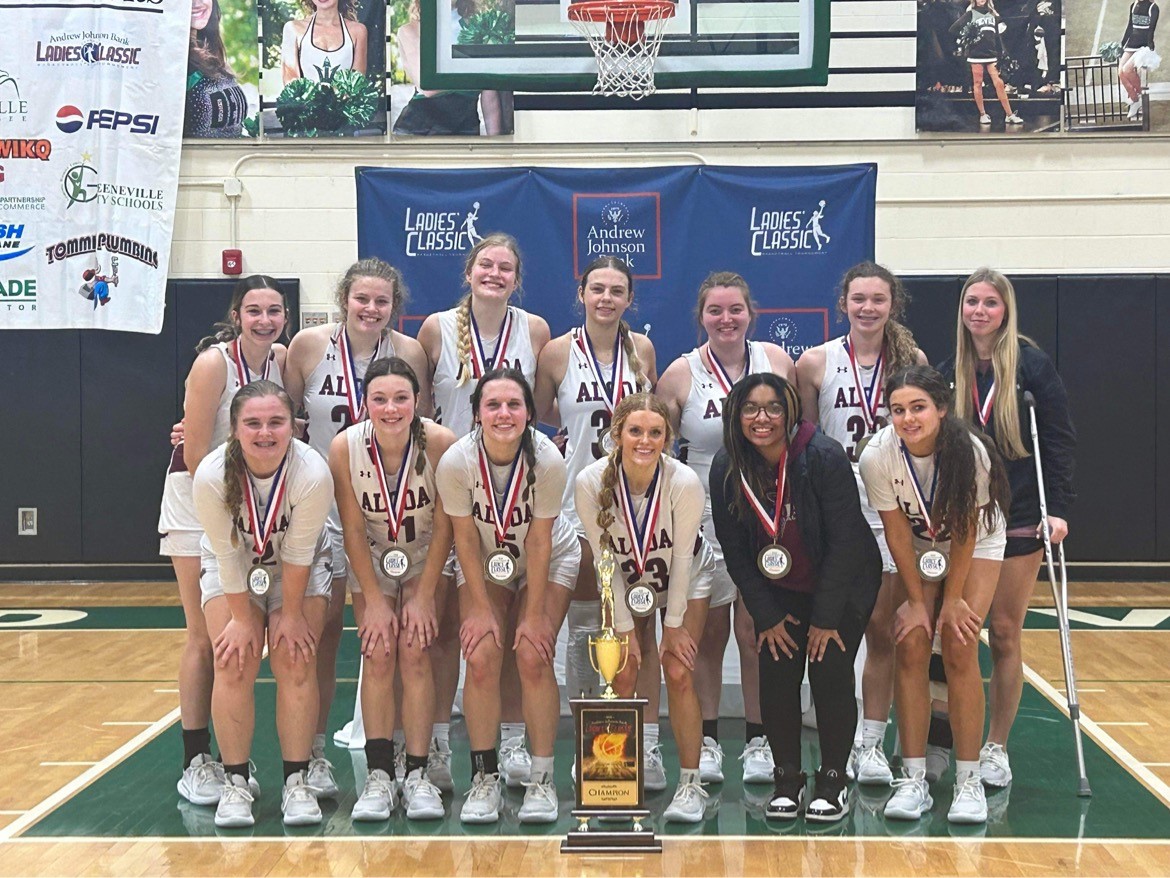 Greeneville – Alcoa ended 2022 on a positive note Saturday night, as the Lady Tornadoes (14-1) defeated Knox Catholic (8-9) by a score of 58-47 to win their first ever Andrew Johnson Bank Ladies’ Classic in Greeneville. The tournament is the second that Alcoa has won over the holiday break, as the Lady Tornadoes won the KSV Events Holiday Tournament in Orlando, Fla. before Christmas.

“It says a lot about our team and the toughness we have” Alcoa coach David Baumann said. “That’s what we talked about before this game. We said, ‘This will be a suck it up, buttercup type of game.’ We had four games in four days, coming off traveling to Orlando and back and playing three games down there. Our girls stepped up. This is a very prestigious tournament and we’re honored to be a part of it. You had a lot of teams from out of state come in with one loss or no losses and you end up with an all-Tennessee final four. It’s just a testament to how good girls basketball is here in this state. We feel good about what this sets us up for at the end of the year and that’s part of why we play a tough schedule.” 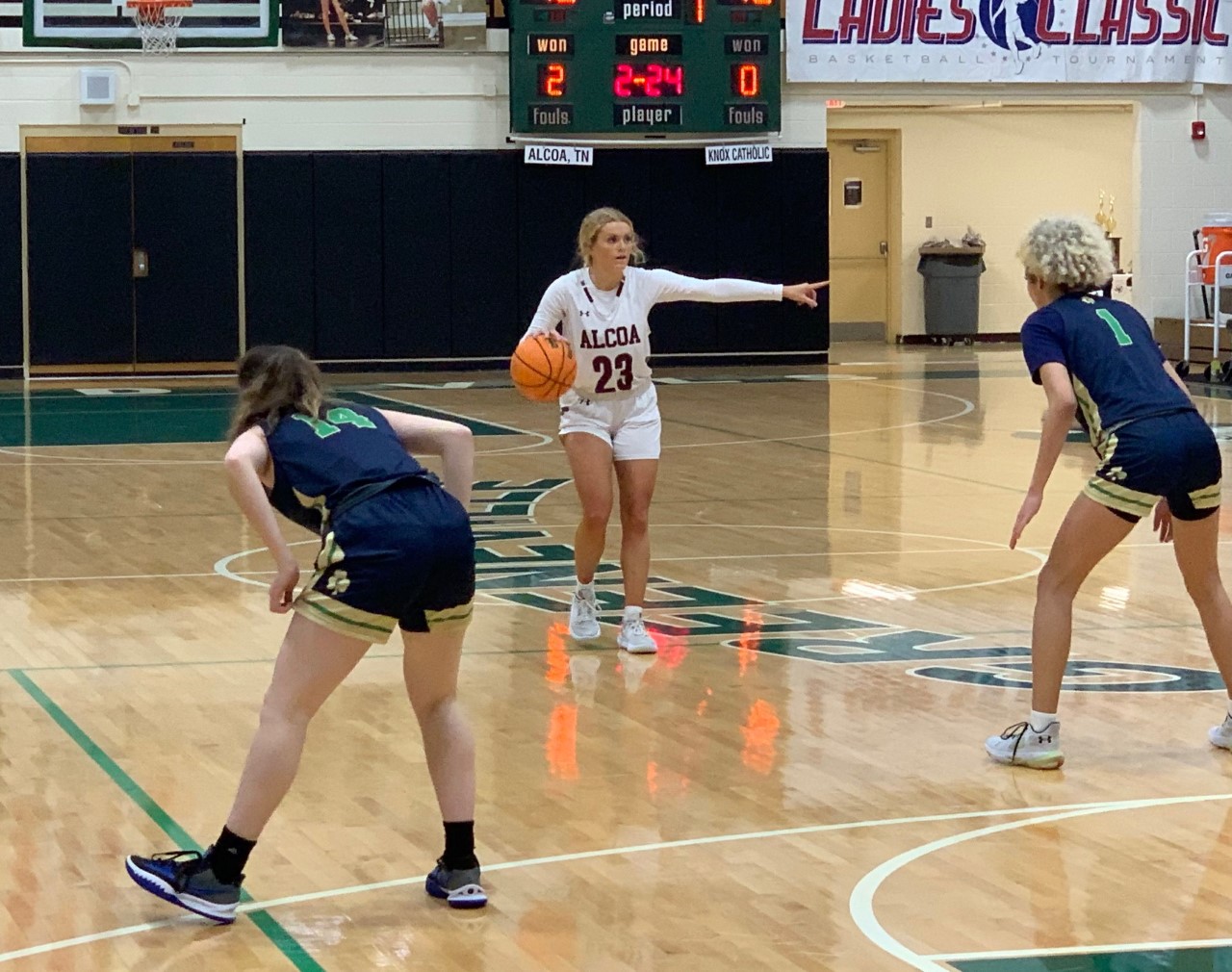 Karli Haworth (23) directs the offense during Saturday night’s 58-47 win over Knox Catholic. Haworth scored a game-high 23 in the contest. Photo by Brian Hamilton

Saturday night’s result was hanging in the balance until the waning minutes of the game, as Alcoa led the majority of the way, but Catholic kept finding ways to keep the game close. The Lady Tornadoes were coming off an emotional comeback win over Upperman on Friday night, so it would certainly be understandable if the team had a hangover against the largest private school in Knoxville. Alcoa did come out with a slow start, but it didn’t take long for Karli Haworth to put the team on her back early in the game.

Knox Catholic opened up the scoring on a Jazmin Williams layup to take a 2-0 lead, but Alcoa would answer on the next possession, as Karli Haworth went for a layup to tie the game at 2-2. Sydney Mains then went to the hoop for a bucket and was fouled, converting the free throw attempt to give the Irish a 5-2 advantage.

It looked as if Catholic may run away with the game early, as Williams grabbed a steal and took it for the layup and a 7-2 lead, but the Lady Tornadoes began to settle in from that point on. Haworth nailed a three on the next trip down, cutting the Irish lead to 7-5. A layup by Mak Bremer would tie the game at 7 apiece and the teams were tied at 12-12 after the first quarter buzzer.

Alcoa took its first lead of the day on a three by Haworth to put the Lady Tornadoes ahead 15-13 with 6:11 left in the half. Layups by Haworth and Bella Daugherty pushed the lead to 19-14, forcing Catholic to take a full timeout with 4:23 left in the second quarter.

On the next Alcoa possession, senior Macie Ridge drove to the goal and hit her head hard on the floor after a collision with a Catholic defender. Ridge would exit the game for the rest of the first half.

Mains hit a three to trim the Alcoa lead to 19-17, which was followed by a layup by Bremer to increase the Lady Tornadoes’ lead to 21-17. Mains then went down and hit another from long range, cutting the Alcoa lead to 21-20 with just over two minutes remaining in the first half.

Amelia Pfeiffer hit a layup to give the Lady Tornadoes a 23-22 lead, but a layup by Mains would pull Catholic to within 23-22 with 58 seconds left. On the next Alcoa possession, the ball was tipped out to Haworth on a rebound and the senior knocked down a three to increase the Lady T’s lead to 26-22 with 41 seconds left in the half. Ridge was sorely missed defensively during the last four minutes of the half, as her defensive assignment, Sydney Mains, managed to keep Catholic in the game during that stretch. Alcoa would take a 26-24 advantage to halftime.

“Macie Ridge did an outstanding job when she was in the game on Sydney Main,” Baumann said. “You had that stretch at the end of the second quarter when Macie’s hurt and she’s out and Sydney just went nuts. I don’t know what her numbers were in the second half, but I know she was pretty limited to what she scored when Macie was on her, but it was a team effort because a lot of people helped off of her.” 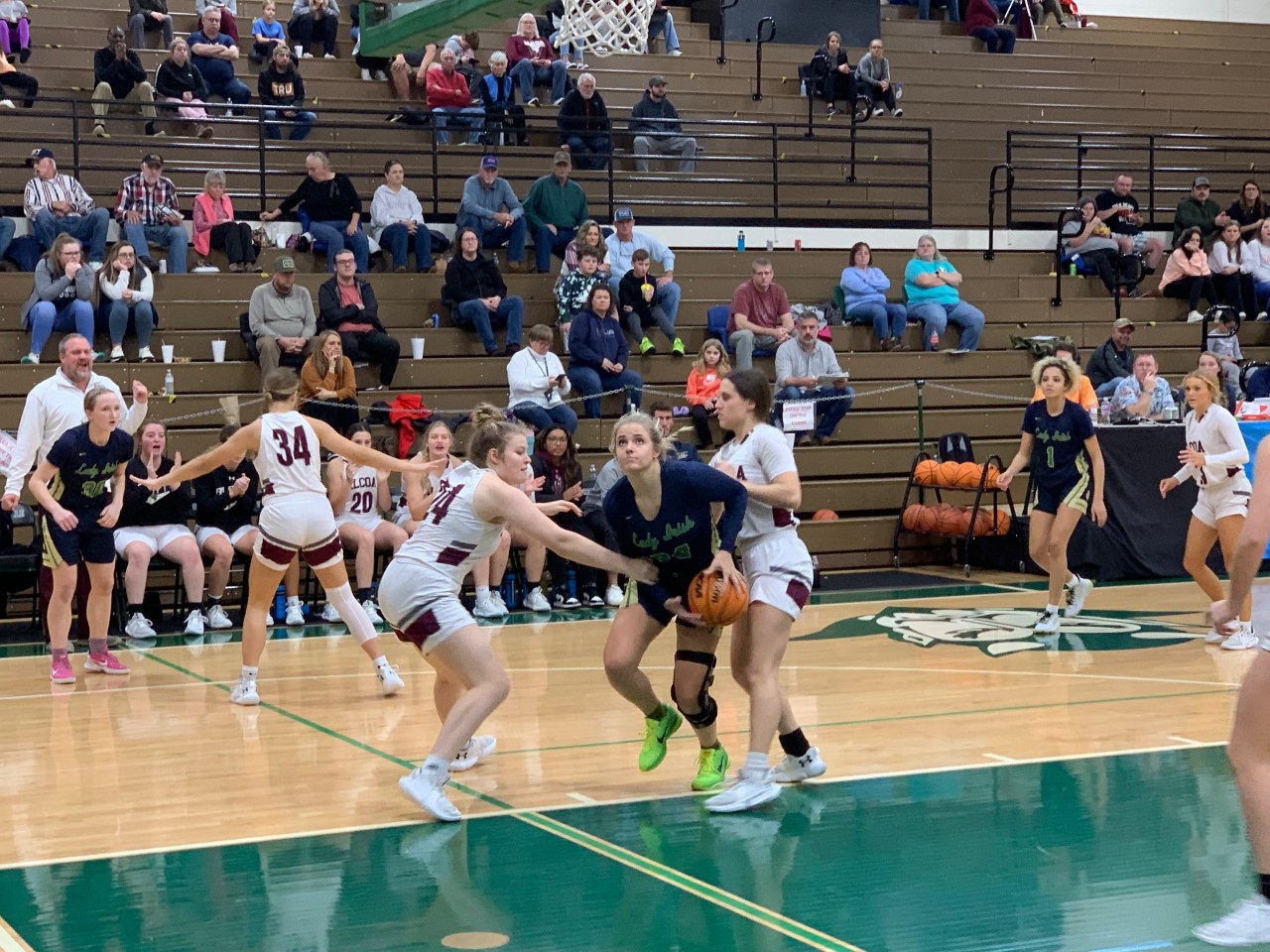 Ridge started the third quarter for Alcoa, which would help in keeping Mains in check, but Haworth continued her hot shooting streak out of the locker room, as the senior hit another three to give the Lady Tornadoes a 29-24 lead. Catholic surged back, however, as a layup by Maggie Frana tied the game at 29-29 with 2:48 remaining in the third. Bremer would put Alcoa back in front 31-29 with an up and under layup on the next Lady Tornadoes possession.

Catholic would tie the game at 31-31 on a basket by Jazmin Williams, who was fouled on the play. Williams missed the free throw but corralled the rebound and scored to put Catholic ahead 33-31 and give the Irish their first lead since 13-12.

Haworth would come through under pressure again on the other end, as she converted an old-fashioned three-point play to put the Lady Tornadoes back in front 34-33 with 1:41 left in the third period.

Kara Pitts then hit a driving layup to increase the Alcoa lead to 36-33, which was followed by a rebound and putback by Caroline Krueger, which made the score 36-35 at the end of the third quarter.

Bremer opened the fourth quarter with a layup to give the Lady Tornadoes a 38-35 lead. Krueger then tied the game at 38-38 on a basket and foul shot. A three-pointer by Haworth stretched the Alcoa lead back to 41-38 with just under seven minutes left in the game.

Ridge then drove to the basket, pivoted, and then hit a layup to increase the Lady Tornadoes’ lead to 43-38. At this point Alcoa began to slow the game down and take some time off the clock. Due to this, Amelia Pfeiffer found herself wide open under the basket for a layup to give Alcoa a 45-38 lead.

Two free throws by Ridge would stretch the Alcoa lead to 47-38 before Catholic made two consecutive layups to cut their deficit to 47-42 with 3:27 remaining. A three-point play by Kara Pitts would stretch the lead back to 50-42.

Mains drove the lane for a layup on the next possession to make it a two possession game with just over three minutes remaining, but Haworth stretched the lead back to 52-44 on the next Alcoa possession. Amelia Pfeiffer scored on an easy layup to put the Lady Tornadoes ahead 54-45 and Ridge then stole the ball from Mains and drove to the hoop for a basket, putting the finishing touches on an Andrew Johnson Bank Ladies’ Classic championship. 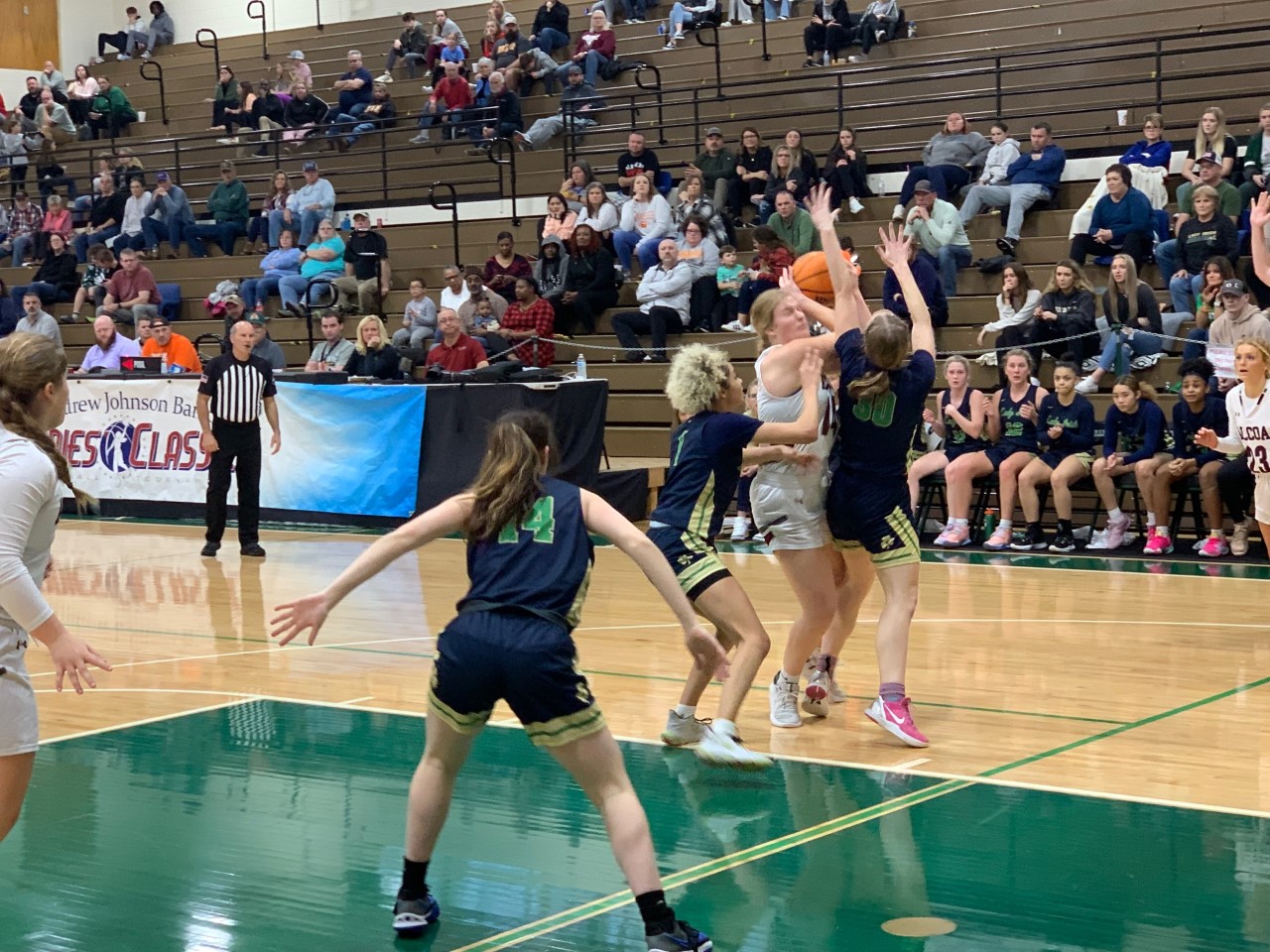 Amelia Pfeiffer (14) goes up for a basket while being defended by Knox Catholic’s Jazmin Williams (1) and Maggie Frana (30). Photo by Brian Hamilton

Mak Bremer would put the ribbon on the win, sinking two free throws with 15 seconds left to give Alcoa a 58-47 win.

“We got stops. We got defensive stops, more than anything,” Baumann said of Alcoa’s ability to pull away late in the fourth quarter. “It was a back and forth affair and we finally did a better job of coming under the screen on (Williams).”

Karli Haworth, Macie Ridge and Mak Bremer were all named to the all-tournament team, along with Catholic’s Jazmin Williams, Sydney Mains and Logan Connatser. Mains was named MVP of the tournament, as the junior guard set the tournament record for three-pointers with 23, breaking the previous record of 21.

The Lady Tornadoes will get a short rest before their biggest challenge of the year, a home date with unbeaten Bearden (15-0) on Tuesday. Alcoa has won 14 straight, however, after dropping the season opener to McMinn Central.