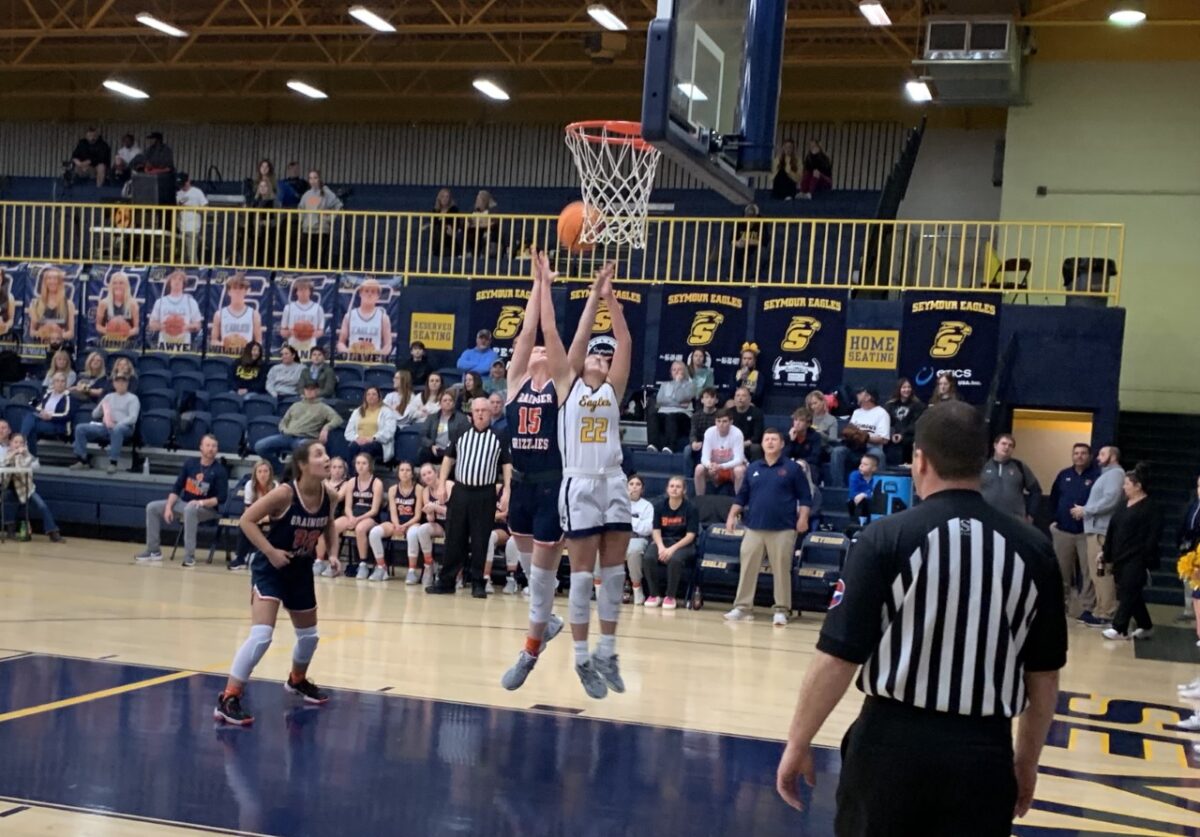 SEYMOUR – Seymour continued its hot shooting and defensive dominance on Monday night, as the Lady Eagles put the clamps on Grainger early and never let up. Seymour trailed once midway through the first quarter and never trailed again, as the Lady Grizzlies were unable to handle the Lady Eagles’ pressure defense, resulting in a 54-25 win for Seymour.

After the Gatlinburg-Pittman loss over one month ago, Seymour was 4-6 and riding a four game losing streak. Since that game, the Lady Eagles have only lost one game, to Pebblebrook (GA) in the Tampa Bay Christmas Invitational. 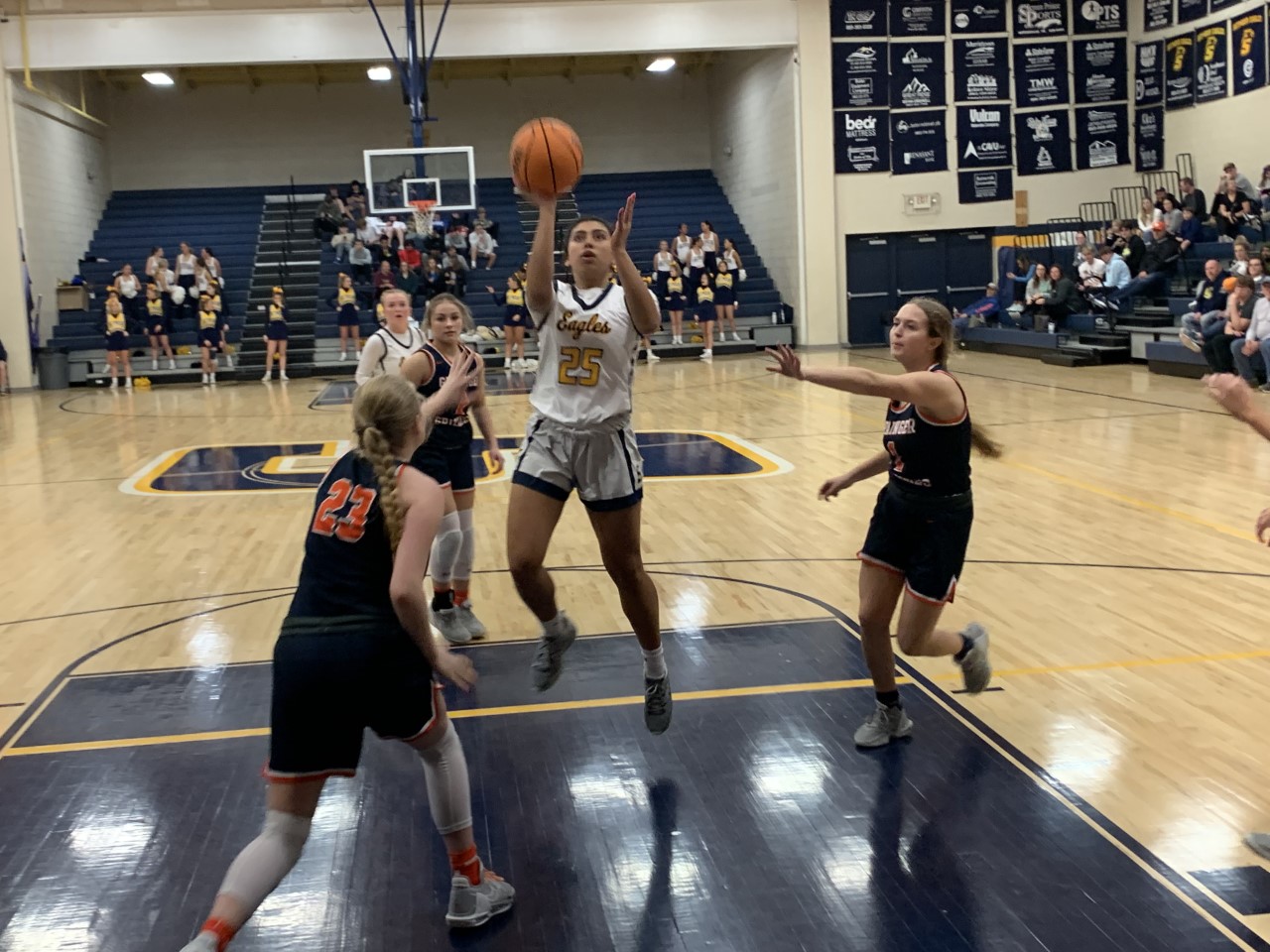 Seymour’s Alicia Cruz (25) goes up for a basket during the fourth quarter of the Lady Eagles’ 54-25 win over Grainger on Monday night. Photo by Brian Hamilton

“The game was a lot faster early on, playing the Alcoa’s, Gatlinburg-Pittman’s and Sevier County’s, but there’s a reason why we played that schedule,” Seymour coach Greg Hernandez said after the game. “(We did it) to prepare us for the tough stretch of the year and the tournament.”

Jaden Cummings opened the scoring for Seymour with a three to put the Lady Eagles ahead 3-0, but Adison Hayes answered on the other end with a basket to make the score 3-2. Hayes would later go to the line and sink two free throws to put the Lady Grizzlies in front 4-3 with 4:38 left in the first quarter, but unfortunately, this would be the only lead that Grainger held in the contest.

Seymour took a 14-6 lead before Hayes stopped the bleeding with a basket to make the score 14-8 with 6:11 left in the second quarter. Brielle Turner would come down on the other end and drain a floater to double the Lady Grizzlies up at 16-8.

A rebound and layup by Grainger’s Marly Tanner would cut the deficit to 18-10, but Caiden Russell hit a three on the other end to increase Seymour’s lead to 21-10. Russell scored the Lady Eagles’ next basket with a layup to make the score 23-12 with under one minute remaining in the first half.

With the clock winding down in the first half, Alyvia Sneed attempted a three for Grainger, but left too much time on the clock for the Lady Eagles. The shot rattled out and was rebounded by Cummings, who went up court with it with roughly 10 seconds left. Cummings hit Chloe McCoy under the basket, who in turn, passed it back out to Russell at the top of the key. Russell faked and went right and then drained a step back three at the buzzer to give Seymour a 26-12 halftime lead.

Two baskets by Bailey McCoy to open the third quarter put Seymour in front 30-12, but Hayes would hit a three for Grainger to cut the deficit to 30-15. The Lady Eagles held a 35-15 lead before Cummings banked in a three pointer, giving Seymour a 38-15 lead. That would be the score after three quarters, as the Lady Eagles closed the third on an 8-0 run.

Seymour’s dominance would into the fourth quarter, as the Lady Eagles extended the run to 16-0, leading 46-15 with 5:16 to go. Two free throws by Addison Brickey would end Grainger’s drought and make the score 46-17. 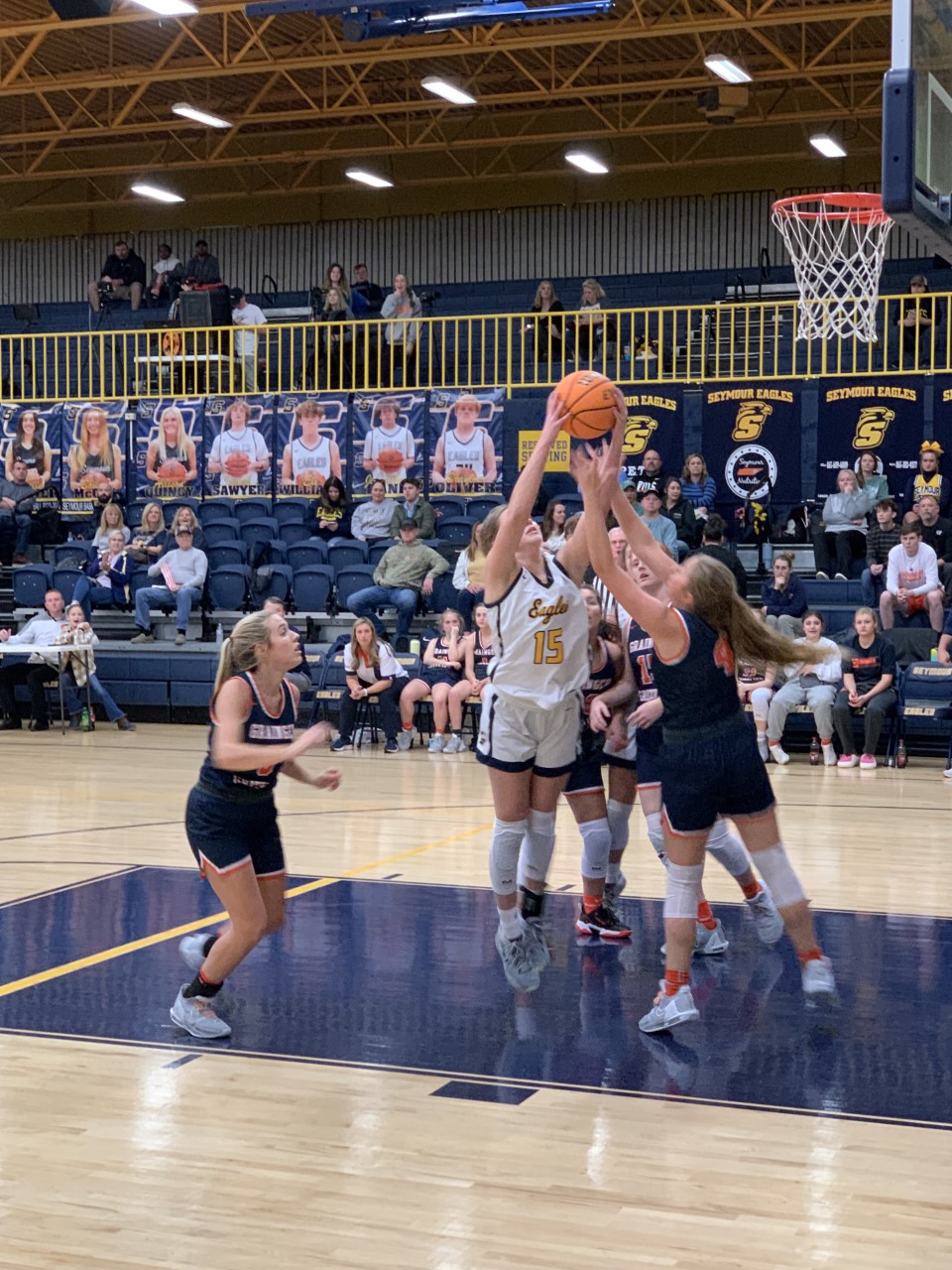 A basket by Chloe McCoy would extend the Seymour lead to 48-17, followed by a Grainger basket by KatiAnn Dossett to make the score 48-19.

Seymour cleared the bench at the end of the game, allowing the freshmen reserves to play. Kali Fisher drained a jumper from the corner to put the Lady Eagles up 50-19 and Savannah Marma nailed a long two-point basket to make the final score 54-25.

“It’s always good to get the younger kids in for about six minutes in the game,” Hernandez said. “That’s their chance to experience the speed of the game and the physicality of the game.”

Seymour was balanced across the board in scoring, with Jaden Cummings and Bailey McCoy leading the way with 11 points each, while Kaylen Schultz finished with nine and Caiden Russell finished with eight.

The win was the sixth in a row for the Lady Eagles, who are undefeated in 2023, and the team has now won 11-of-12, dating back to the Gatlinburg-Pittman loss on December 12. Seymour will get a third crack at the Lady Highlanders on January 24.

Seymour (15-7) will have one more tune up on Tuesday at Gibbs (8-12) before hosting Gatlinburg-Pittman, who defeated the Lady Eagles in their first two matchups this season.