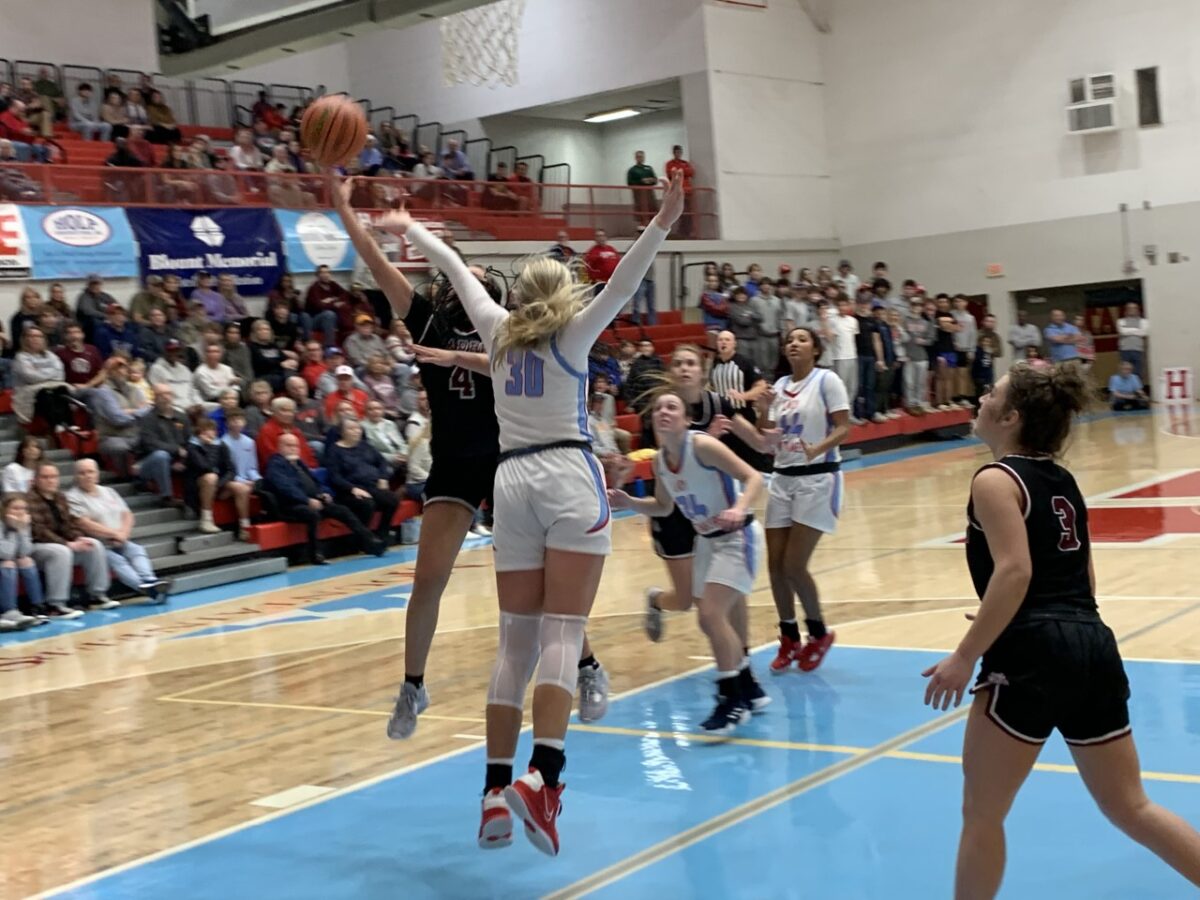 WALLAND – Tuesday night’s game between Bearden and Heritage featured two teams with a combined one loss. The closest Bearden had come to being beat was at Alcoa earlier in the month, when the Lady Bulldogs used a furious rally to snatch a win from the jaws of defeat, winning 34-33. The Lady Mountaineers’ only setback was a 61-60 comeback loss to Cumberland County in the final of the Heritage Christmas Tournament before Christmas.

This game lived up to its billing for all of three quarters, as Carsyn Swaney put forth a heroic effort with 27 points, but it was a 14-0 fourth quarter run by Heritage that sealed the Lady Mountaineers’ fate. 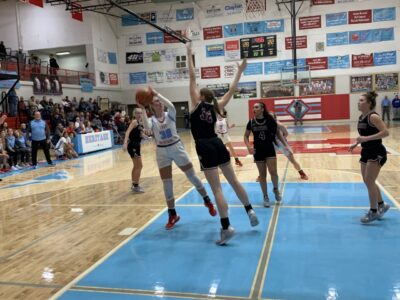 Heritage’s Chloe Heath (30) goes up for a shot against Bearden’s Avery Treadwell (32) during the Lady Mountaineers’ 55-43 loss to the top-ranked Lady Bulldogs on Tuesday night. Photo by Brian Hamilton

“You hold them to 50-something points, and we’re supposed to win that game,” Heritage coach Rick Howard said after the game. “We’ve been averaging 60 (points-per-game). You’ve got to step up and hit big shots and we didn’t. Carsyn did, but she has to have help.”

Heritage jumped out to a 7-5 lead midway through the first quarter and increased its lead to 10-6 when Carsyn Swaney drilled a three pointer with 2:50 left in the first quarter. Bearden’s Avery Treadwell would answer with a layup to cut the deficit to 10-8, but a rebound and put back by Chloe Heath would put the Lady Mountaineers up 12-8 with just 1:26 left in the first period.

Emma Rainey would hit a layup to tie the game at 12-12 with 24 seconds to go in the quarter and a shot at the first quarter buzzer by Natalya Hodge would give Bearden a 14-12 advantage going into the second quarter.

Bearden increased its lead to 18-15 midway through the second quarter and a rebound and score by Amanda Parker would stretch the Lady Bulldogs’ lead to 20-15 with 3:39 left before halftime.

A basket by Carsyn Swaney would cut the Heritage deficit to 20-17. Bearden would lead 22-17 late in the second quarter, but a layup by Swaney with four seconds left sent the Lady Mountaineers to halftime trailing just 22-19.

Swaney kept the momentum going in the second half, as the sophomore guard drained a three to open the third quarter and tie the game at 22-22.

Bearden would embark on a 6-0 run following the Swaney three, as Treadwell made a layup, followed by a layup by Hodge, giving the Lady Bulldogs a 28-22 lead.

Swaney would respond with an old-fashioned three-point play to pull the Lady Mountaineers to within 28-25 with 4:05 left in the third quarter. A long jumper by Bearden’s Parker would push the lead back to five, at 30-25.

Heritage soon found itself down 37-26 with 42 seconds left in the third quarter after a three by Hodge and a layup by Lainey Cox.

Olivia Boyce was fouled and made a pair of free throws to trim the Bearden lead to 37-28 with 38 seconds left in the period, but the Lady Mountaineers would trail 38-28 going into the final quarter.

Bearden led 40-30, when Swaney hit back-to-back threes to cut the Heritage deficit to 40-36 with 4:38 remaining. However, two consecutive layups by Hodge would stretch the Lady Bulldogs’ lead back to 44-36 with just over four minutes remaining. 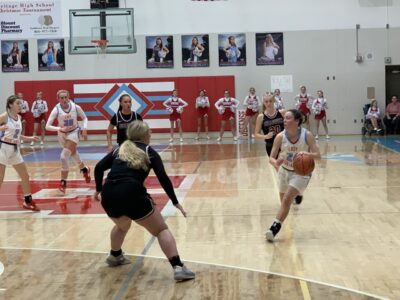 Heritage’s Becka Gardner (24) looks for room against the Bearden defense. The senior point guard was held to seven points on 3-of-17 shooting in the contest. Photo by Brian Hamilton

Things would then begin to snowball for the Lady Mountaineers, as Rachael Wilhoit went to the line and converted two free throws to stretch the lead to double-digits, at 46-36. Hodge then found Wilhoit on a fast break for a layup and a 48-36 lead with 3:19 to go.

Two free throws by Avery Treadwell would make the score 50-36 and a Treadwell layup on the next possession would push the Lady Bulldogs’ lead to 52-36. After a steal and layup by Wilhoit, the Lady Mountaineers looked up and found themselves down 54-36, as Bearden had just capped off a 14-0 run, putting the game all but out of reach.

Becka Gardner would hit a jumper with 39 seconds left to make the score 55-41, followed by a rebound and layup by Aleyah Smith with 12 seconds left, but it was too little, too late, as Heritage fell to top-ranked Bearden 55-43.

Carsyn Swaney led all scorers with 27, but Bearden held the Lady Mountaineers’ other top scorers to well below their season averages. Becka Gardner finished with just seven points on 3-of-17 shooting, while Chloe Heath was held to just two points.

“I take my hat off to that girl. She’s a gamer and there’s no doubt about that,” Howard said of Swaney’s performance. “You’ve got to have your other kids averaging double-figures score. If they score double-figures, like normal, we win the game. You know they’re going to have bad games, but you just don’t want all of them to have one on the same night.”

“I don’t think it was anything Bearden did, we just didn’t hit shots,” Howard said. “We had plenty of open shots, and you’ve got to knock those down.”

Bearden (21-0) will try and improve on the best start in school history and keep its unblemished season intact on Friday when Hardin Valley (12-7) visits, while Heritage (17-2) will try and get back on track at home on Friday against Farragut (15-7, 3-1 district) in an important district tilt.