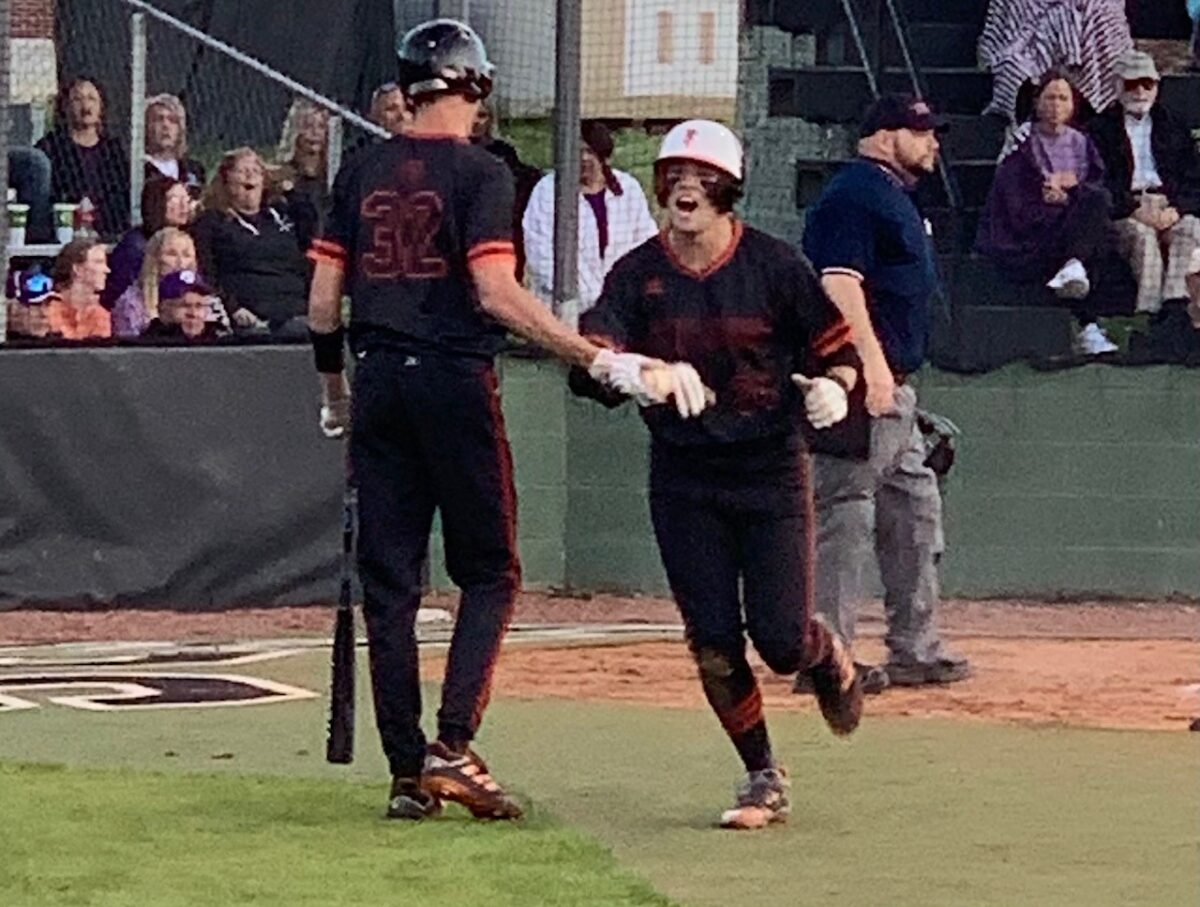 PIGEON FORGE – Sevier County scored three runs in the top of the 7th inning to turn a 5-0 shutout into a 5-3 thriller, as a fatigued Dylan Loy gave up his first runs of the game. Third baseman Trevan Myers moved to the mound for relief and made the last out, striking Mason Ellis out swinging for a 5-3 win on Thursday night.

“You know going into it, with Loy, that you’re not going to have that many opportunities,” Sevier County coach Casey Taylor said. “Good arms give you fewer chances to produce and score, so we knew it was going to be tough to score on him. What stands out to me is the competitive spirit of our players. They’re down five and they’re not out of it. It’s just how they are. It’s crazy how the tides can turn.” 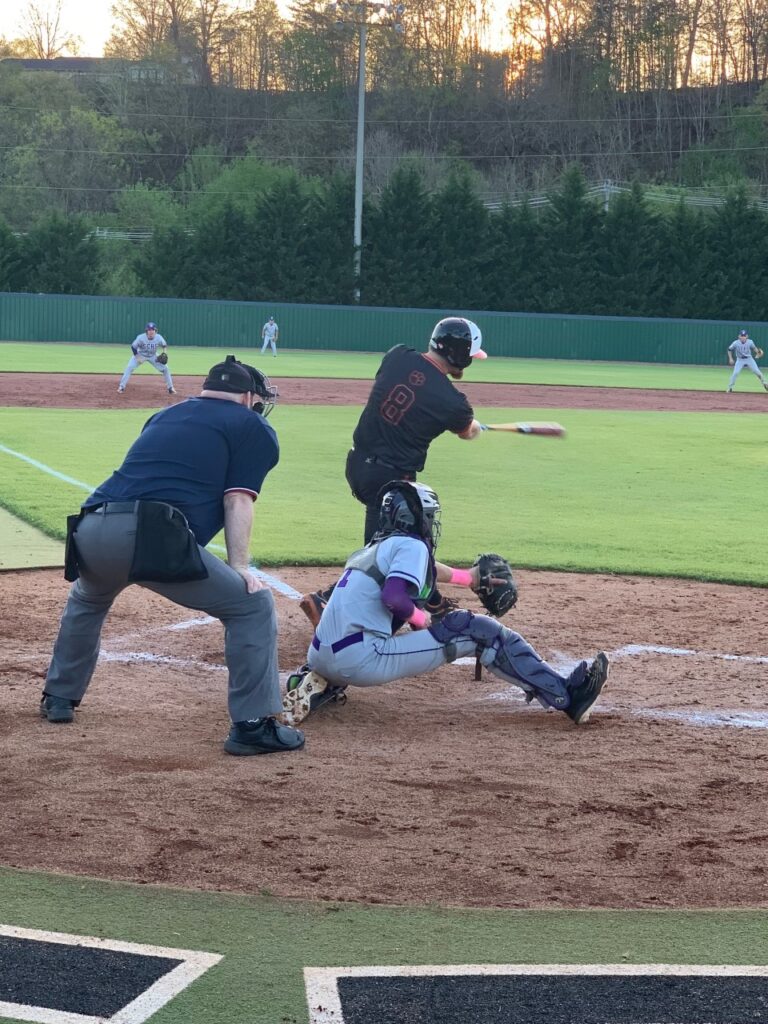 Riley Franklin (8) gets one of his two hits of the evening, during Pigeon Forge’s 5-3 win over Sevier County. Photo by Brian Hamilton

It wasn’t until the bottom of the fourth inning that the Tigers scored, as both lefties — Pigeon Forge’s Loy and Sevier County’s Brady Scott — looked sharp early. Trevan Myers singled on a line drive to left field to advance Bryce Effler to third base with one out.

After Holt Hensley stuck out swinging for the second out, Conner Catlett hit a single on a line drive to score Effler and Myers for a 2-0 lead. Catlett would be tagged out heading to second, however, ending the inning for the Tigers.

Pigeon Forge would tack on another run in the bottom of the fifth inning, as Riley Franklin stole third and then advanced home on an error by Scott for a 3-0 advantage.

The Tigers tacked two more runs on in the sixth inning, as Myers hit a ground ball to center field to score Tyson McFall from second base for a 4-0 lead.

Hensley would ground out to first baseman Drew Mattox for Pigeon Forge’s first out, but not before Myers scored to stretch the Tigers’ lead to 5-0.

Sevier County brought in Ty Koch to relieve Scott and the junior was able to get out of the inning with minimal damage, as Catlett grounded out to first base and Loy grounded out when third baseman Gavin Joslin fired a throw to first base just in time to catch Loy to end the inning.

“Listen, at 5-0, I’m trying to score another run, because 5-0 is not a big lead in baseball, especially with a team that I know can score runs,” Pigeon Forge coach Mike Guinn said. “We felt like (Sevier County) really had a chance, so we wanted to stay after it.”

The top of the seventh inning was the Smoky Bears’ last chance and did they make the most of it. Loy quickly struck the first batter out, in Cam Hodges, but things got a bit hairy from this point forward.

Koch singled on a line drive to center, followed by Loy walking Bridger Hamilton to move a runner into scoring position.

Mason Freeman singled on a line drive to center field to score Jake Tipton, who was pinch running for Koch, and loaded the bases for Sevier County with the score 5-1. 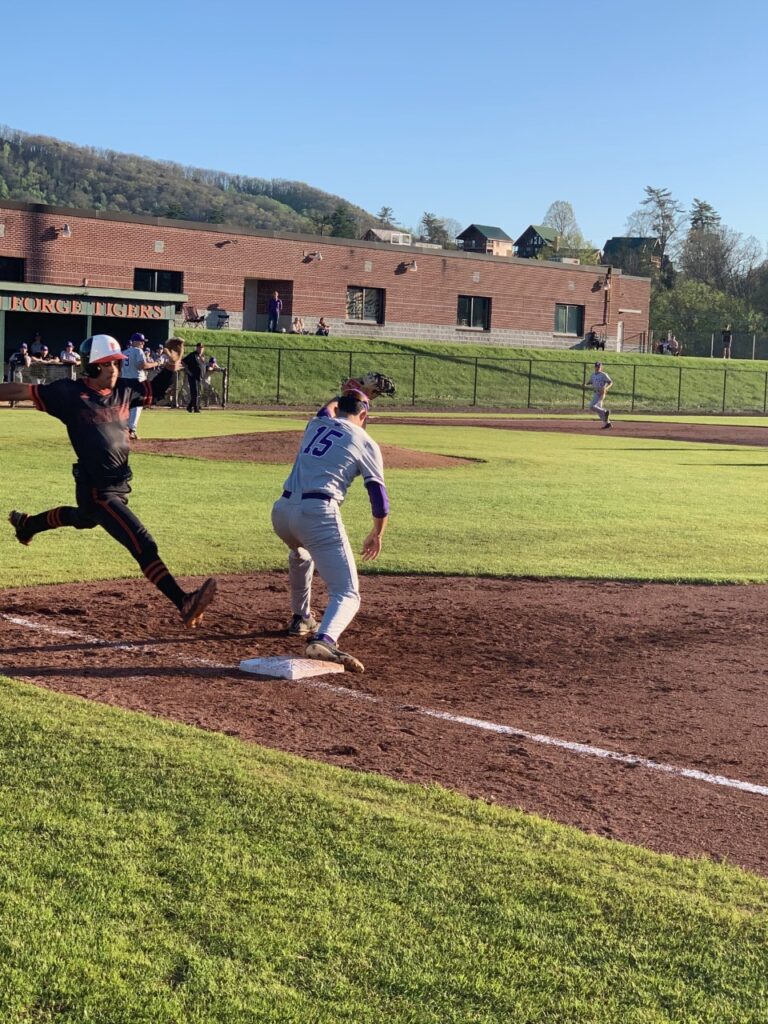 Sevier County’s Drew Mattox (15) gets Kevin Fernandez (5) out at first base. Photo by Brian Hamilton

Kaleb Townsend was substituted as a runner for Mattox and the following batter, Knox Kremblas, grounded out for the second out, but not before Hamilton crossed the plate to cut the Tigers’ lead to 5-2.

The idea was to leave Loy in for the final out, but Corbin Overbay singled on a ground ball to Loy, which was fumbled before throwing to first base, allowing Townsend to score and cut the Pigeon Forge lead to 5-3.

“A lot of our guys have played baseball for a long time, and they’ve been raised in a good, competitive environment and they don’t just roll over,” Taylor said. “We were down six to a really good team in a tournament and they come in and scored six on us in the bottom of that inning and we scored six in return. It’s pretty rare, but with our guys, I wouldn’t call it a wrap until it’s a wrap.”

Loy was relieved by Myers with two outs, as the tying run, in Mason Ellis, came to the plate. Myers struck Ellis out swinging, however, to preserve the win.

“He was a little tired,” Guinn said of Loy’s late game struggles. “It’s the middle of the year and that’s his highest pitch count and he got a little tired, so I just had to get him out of there.”

“I’ve got a very high level of respect for Loy and in my opinion, more than us doing great things offensively, even though we did some great things, the equalizer was probably him probably starting to fatigue a little bit and maybe starting to flatten out a little bit,” Taylor said. “He was at 115 or 116 (pitches), whatever that number is, and that’s the first time he’s been at that number this year. I still compliment what our guys did, but I am still very complimentary of him.”

Pigeon Forge tallied nine hits for the game, as Riley Franklin and Trevan Myers led the way with two hits apiece. Franklin also led the Tigers with two stolen bases, as the team finished with five stolen bases on the game. Corbin Overbay led Sevier County, going 2-for-4 from the plate and an RBI.

Dylan Loy picked up the win for Pigeon Forge, allowing five hits and three late runs, while striking out 11 batters. Myers came in and recorded the last out to pick up the save.

Sevier County’s Brady Scott (9) throws a pitch during the second inning of the Smoky Bears’ 5-3 loss to Pigeon Forge. The sophomore did not give up a run until the bottom of the fourth inning. Photo by Brian Hamilton

“You talk about a guy with that competitive flair, and he’s got it,” Taylor said of Scott. “He was pissed when I took him out and I love it. We took him out, not because we’re calling it a wrap, but because we’re keeping him on a certain pitch count and now he’s available for us to go on Monday, if we choose to throw him on Monday (against Morristown). He’s very efficient, he’s very effective and he’s got multiple different looks and multiple different varieties in his arsenal. We have three, maybe three-and-a-half arms that we feel really comfortable with and he makes an argument that he is potentially our best guy and so can (Drew) Mattox and so can (Kaleb) Townsend.”

Guinn said it was important for his team to come out and play well after seeing their 19-game win streak end at the hands of district foe Union County on Tuesday in a 4-3 road loss. It was the first loss the Tigers had suffered since the season opener against Gibbs at Lindsey Nelson field.

“(Union) did a good job and it was a good loss for us,” Guinn said. “Sometimes you need some adversity to be able to make strides and luckily, yesterday in practice, we made some strides. There are some guys that people don’t know who came in here today and had some great games against a really good team with a really good pitcher on the mound.”

Pigeon Forge (20-2) and Sevier County (13-7) each play a double-header on Friday in the Kingsport Invitational.