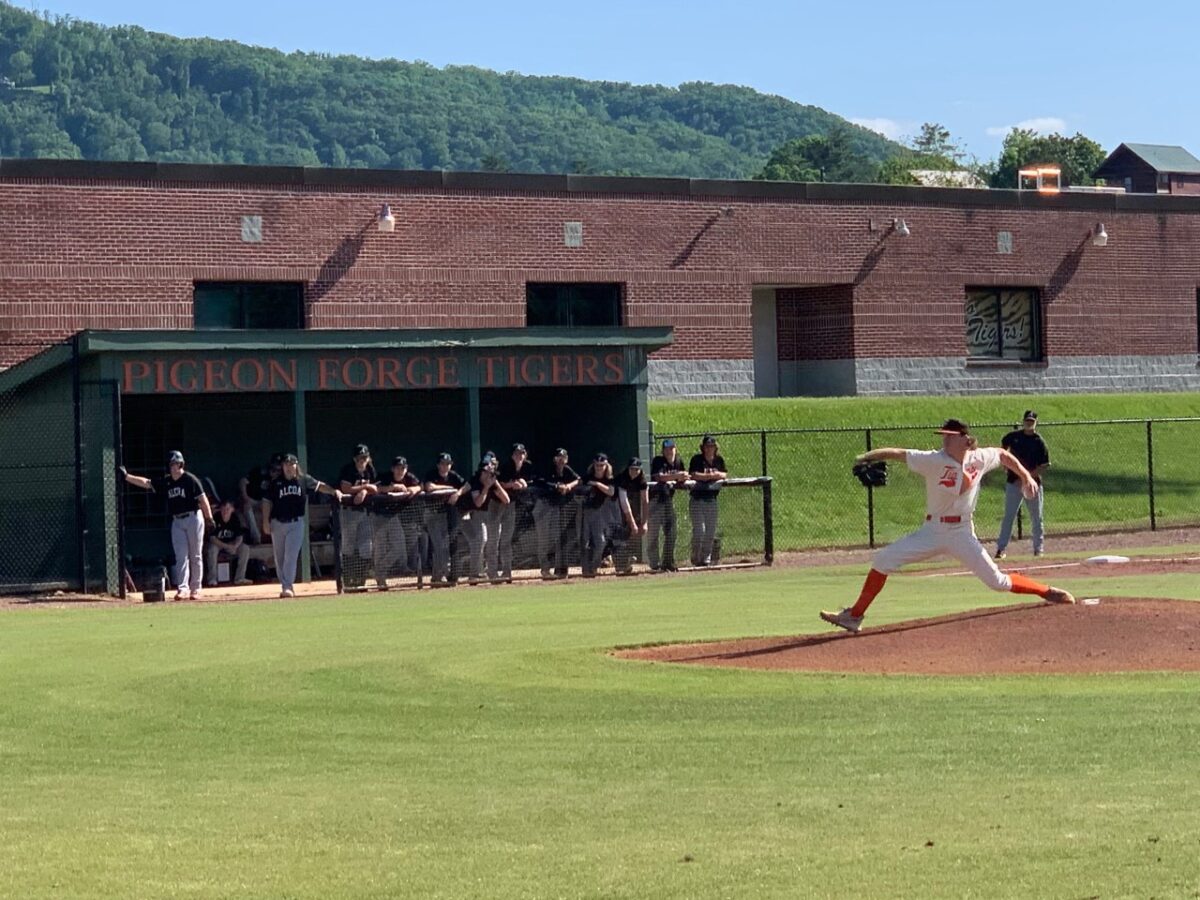 PIGEON FORGE – Mike Guinn picked up his 500th win as a head coach on Monday evening, as Pigeon Forge used a 14-run third inning to build an 18-1 lead over Alcoa in the second round of the Class 2A District 2 tournament. The Tornadoes would battle back, scoring four runs in the top of the 5th, but the Tigers would prevail 18-5, cutting the game short due to the 10-run rule.

Guinn began his career at Anderson County but has picked up the majority of the 500 at Pigeon Forge, where he won a state championship in 2013.

“The 500 wins…I’ve had great coaches here with me, I’ve had great players,” Guinn said. “It’s a ‘we’ thing, it’s not a ‘me’ thing. I’ve had so much great help and the guys with me right now have been with me the longest. They’ve been awesome over the years.” 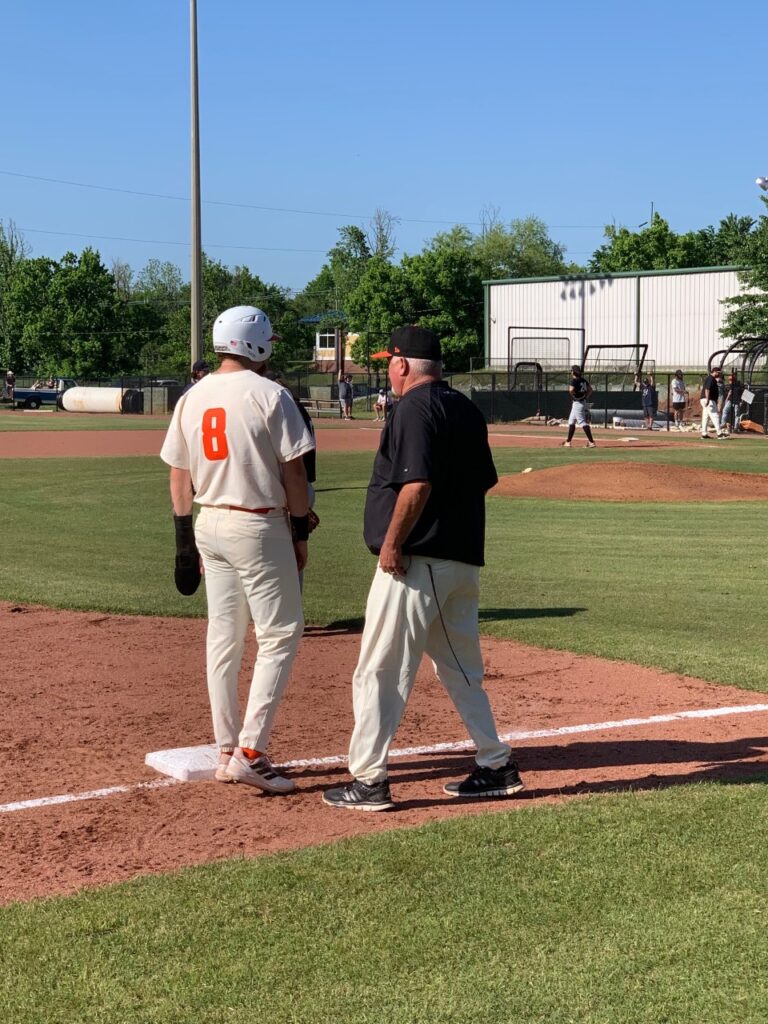 Alcoa starter Nate Pitts started the game with three walks and Pigeon Forge scored its first run when Dylan Loy went home on a wild pitch. Riley Franklin then scored on a passed ball, followed by a Kevin Fernandez double on a line drive to score Bryce Effler for a 3-0 lead.

Fernandez was tagged out advancing to third and then Trevan Myers was caught stealing second base for the second out. The Tornadoes would get out of the inning when Holt Hensley grounded out, salvaging a bad inning that could have been much worse for Alcoa.

Riley Long would score on a wild pitch by Dylan Loy to trim the Tornadoes’ deficit to 3-1, but Loy would strike out Isaac Whitehead swinging to get out of the bottom of the second.

Alcoa made quick work of the first three batters in the bottom of the second, as Mason Martin entered the game in relief for starting pitcher Pitts, sending the Tornadoes to the third inning trailing 3-1.

Loy did the same in the top of the third, going three up and three down in the Alcoa lineup, but the bottom of the third is where the Tigers did their most damage.

Franklin, the first Pigeon Forge batter, took Martin yard for a solo homerun to give the Tigers a 4-1 lead, followed by a Myers single that brought both Effler and Fernandez home, making the score 6-1.

Hensley then singled on a line drive to center field, scoring Myers and Michael McCarter for an 8-1 advantage. The Tigers still didn’t have an out at this point.

Alcoa would finally record its first out of the inning when Martin struck Conner Catlett out looking.

Tyson McFall singled to center field, scoring Hensley for a 9-1 lead, followed by an Effler single that brought home both McFall and Loy, stretching the Tigers’ lead to 11-1 with only one out.

Myers sent Franklin and Effler home with a line drive on a double, making the score 13-1. Josh Simpson would then come in to relieve Martin, who allowed 10 runs in the inning after a stellar second inning. 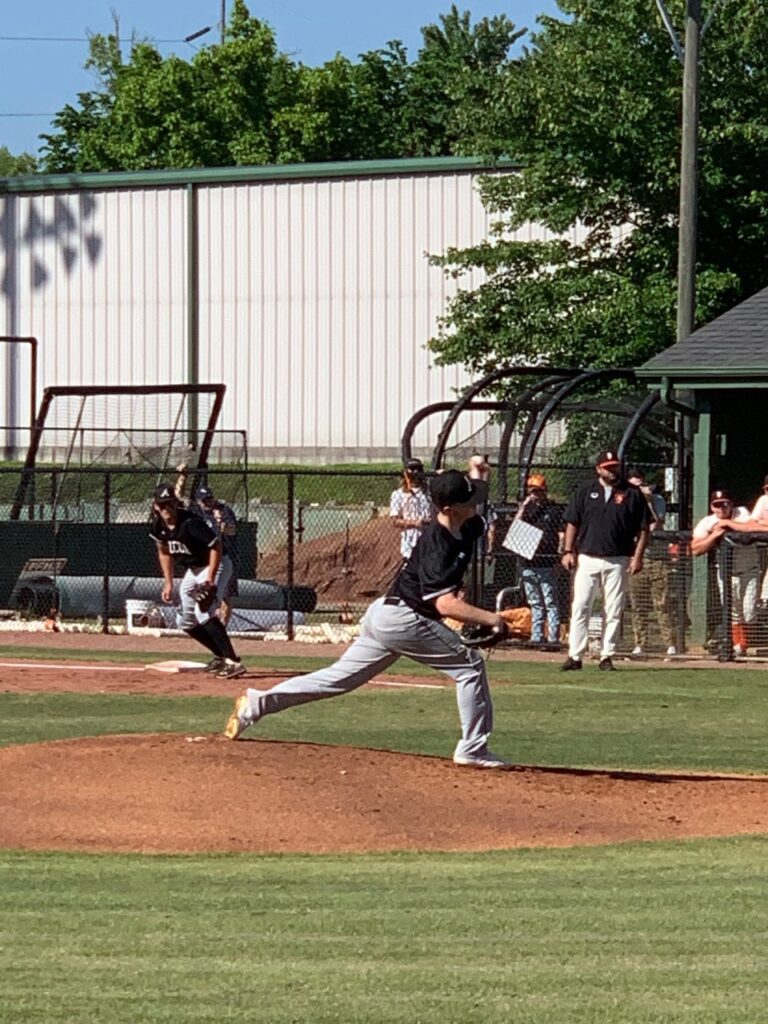 Fernandez scored on a wild pitch by Simpson, making the score 14-1, followed by a Hensley single to bring Myers home for a 15-1 lead.

The Tornadoes finally recorded the second out on a sacrifice fly by Catlett, but McCarter still made it home to increase the Pigeon Forge lead to 16-1.

McFall singled on a line drive to right field, sending Hensley home for a 17-1 lead. Alcoa would finally get out of the nightmare inning when Graham Johnson — who entered the game for Franklin — grounded out to give the Tigers a 17-1 lead going into the fourth inning.

“We’ve been swinging the bat good, and we hit it around,” Guinn said. “They were ready to play.”

Nick Shaw replaced Dylan Loy in the top of the fourth inning and ended the inning without surrendering a run. Pigeon Forge would add one more run in the bottom of the fourth, as Shaw grounded into a fielder’s choice, scoring Brody Traywick for an 18-1 lead.

Shaw walked the first two batters in the top of the fifth inning before Brennan Duggan got on base with a single. Colt Whaley hit one off the left field wall, sending two runners home to cut the Tornadoes’ deficit to 18-3.

Pigeon Forge would pick up the next two outs quickly, as Shaw retired the next two batters on ground outs, securing the 18-5 win for the Tigers.

“We didn’t expect them to just lay down,” Guinn said. “They have good hitters and they’re going to challenge us and we knew that.” 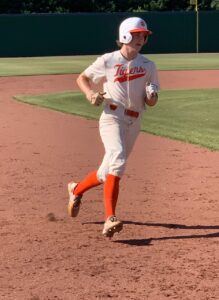 Dylan Loy (14) heads to third base during the 14-run third inning of Pigeon Forge’s 18-5 win over Alcoa. Photo by Brian Hamilton

While Pigeon Forge had taken out most of its starters in the top of the fifth inning, Alcoa was still going with its starting lineup, trying to score enough to keep the game going past five innings.

“They’re supposed to do the job,” Guinn said. “We didn’t pitch well right there and we walked the first two batters and that’s what happens when you do that. They got some good hits and we made an error and that’s three free bases. That’s what happens.”

Franklin, Myers, Hensley, Effler and Myers all drove in runs during the 14-run third inning for Pigeon Forge, as the Tigers racked up 15 hits during the game.

McFall, Hensley, Loy, McCarter, Myers and Effler each registered multiple hits for Pigeon Forge. Loy picked up the win, surrendering one run on three hits over three innings, striking out eight with no walks.

Pitts took the loss for Alcoa, pitching for one-third of an inning, while allowing three runs on one hit and walking three. Riley long went 3-for-3 from the plate to lead the Tornadoes in hits.

“If you don’t throw strikes against a team like that and you give them extra bases and free bases, they’re going to beat you 18-5 and that’s what they did,” Alcoa coach Steve Dunn said after the game.

Pigeon Forge advances to the district championship and will face the winner of today’s game between Alcoa and Union County (6 p.m.) on Wednesday at 5 p.m.