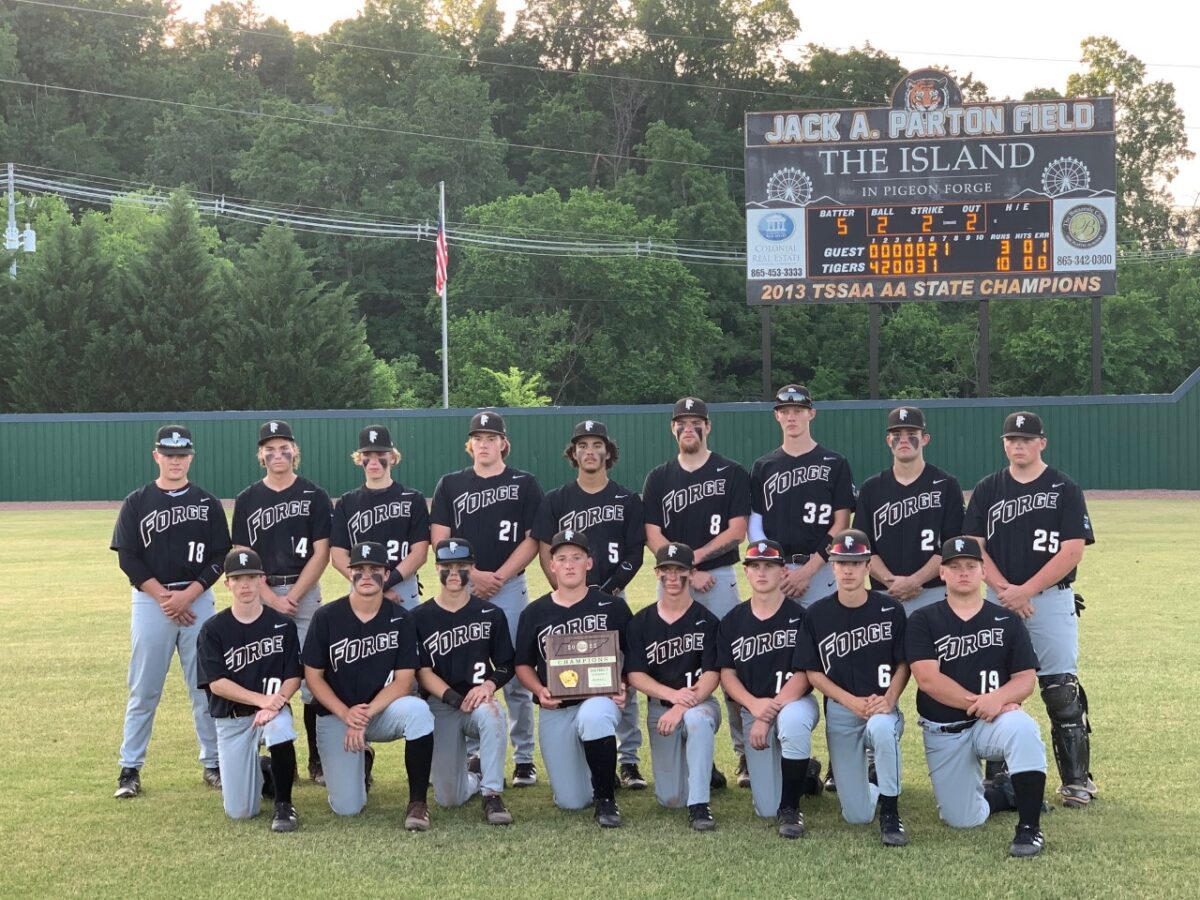 PIGEON FORGE – The Tigers got out to a quick start during the Class 2A District 2 championship on Wednesday evening, as a home run by Riley Franklin propelled Pigeon Forge to an early 6-0 lead. Pigeon Forge almost ended the game in five innings, leading 9-0 after five, but Union County was able to extend the game through the seventh inning. The Tigers would prevail, however, winning 10-3 to give Pigeon Forge its 16th district championship and a berth in the regional playoffs.

Pigeon Forge jumped out to an early 4-0 lead in the first inning, as Franklin hit a home run on a 2-2 count in the second at bat for the Tigers, scoring himself and Dylan Loy, who was hit by a pitch in the first at bat. The homer gave Pigeon Forge a 2-0 lead. 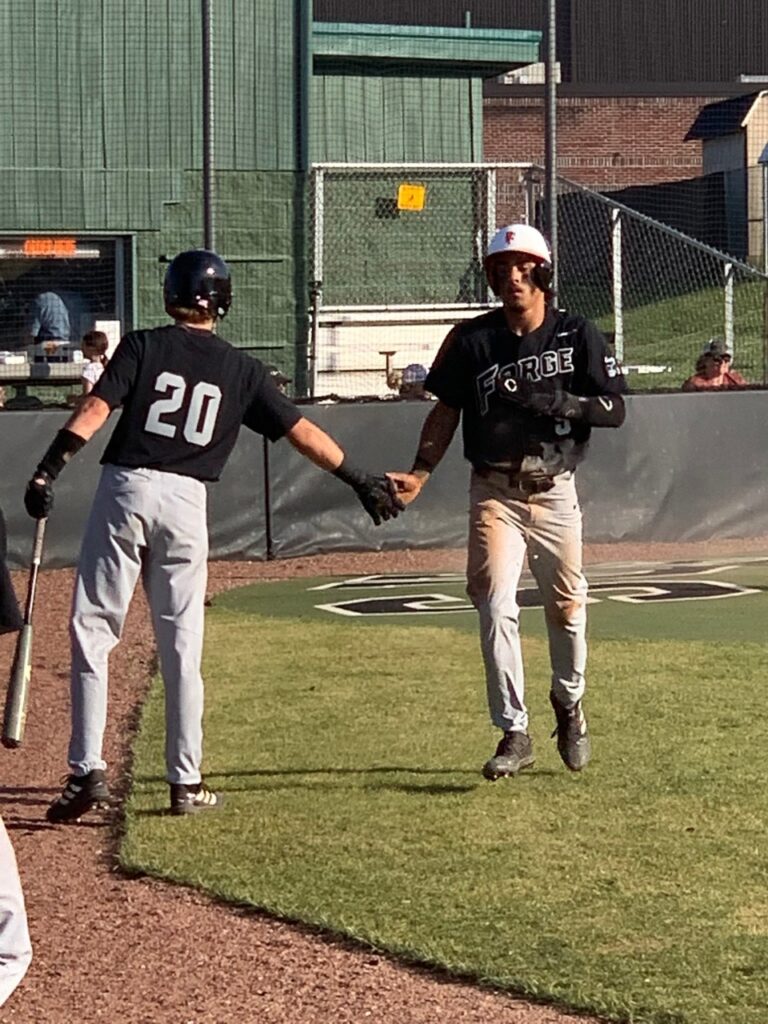 Pigeon Forge’s Kevin Fernandez is congratulated by a member of the coaching staff after scoring a run. Photo by Brian Hamilton

Kevin Fernandez then scored on an error by Union County second baseman Elliot Gibbs for a 3-0 lead. Trevin Myers then crossed home plate on an error by pitcher Eben Hansen to increase the Tigers’ lead to 4-0.

The first inning onslaught finally ended for the Patriots when Michael McCarter got picked off at first base when he went with too much of a lead to end, which did not make Guinn happy, as it ended the inning with runners stranded.

“We don’t like to make mistakes, but we’ve still got some young guys on our team though that have a lot to learn and they’re still learning every day,” Guinn said.

The Tigers drove in two more runs in the bottom of the second inning, as Loy singled on a hard ground ball to center field, sending Ben Archer and Tyson McFall home for a 6-0 advantage. At this point, it looked as if Pigeon Forge would cruise to end the game in five innings.

Neither team scored another run until the Tigers made a push in the bottom of the fifth, as Myers grounded out to second base, scoring Kaden Stinnett for a 7-0 lead.

McCarter then grounded out to first base, but Bryce Effler was able to score to extend the Pigeon Forge lead to 8-0. Another run would score, as Fernandez came home on a wild pitch to make it 9-0.

The Tigers were unable to end the game in the 5th inning, however, as Conner Catlett flew out to right field, leaving Pigeon Forge one run shy of the 10-run rule. 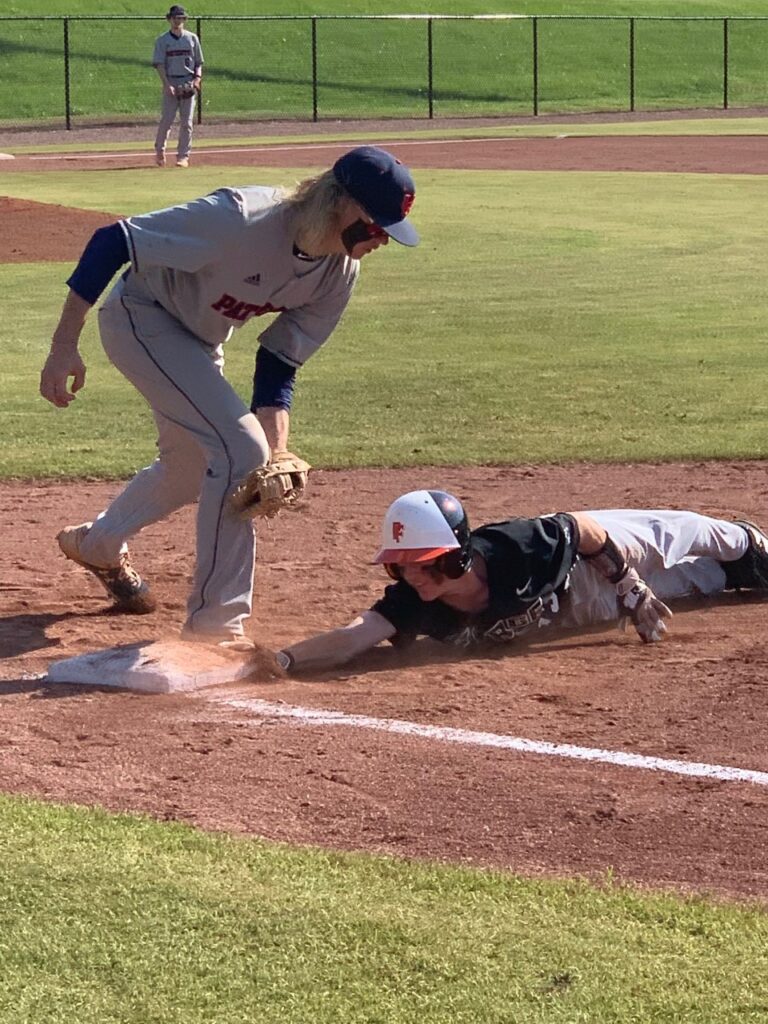 Michael McCarter tries to get back to the bag, as Union County goes for the pick-off attempt. Photo by Brian Hamilton

“It’s just baseball,” Guinn said. “Sometimes, you get a lead like that and it’s just normal to kind of grow complacent. I don’t think anybody did anything any differently, we just came out really fast and hard at the start and that’s what we wanted to do.”

Union County began to stretch the game out in the top of the sixth, as it appeared starting pitcher Riley Franklin began to fatigue a bit. The senior surrendered his first run of the evening when Patriots’ Josh Chesney grounded out to send Eben Hansen home, making the score 9-1.

Franklin then surrendered another run, walking Reed Melton with the bases loaded to send Eli Edds home to trim the Pigeon Forge lead to 9-2. Guinn would then bring junior Tyson McFall in the game for relief, ending Franklin’s day. McFall would get out of the inning on the next batter, as he struck out Gibbs swinging.

Riley Franklin hit a sacrifice fly in the bottom of the sixth inning with one out, which scored McFall for a 10-2 Tigers lead. Union County would score one more run in the top of the seventh, but the Patriots were unable to make a comeback, as McFall struck Chesney out looking for the 10-3 win and the district championship.

“Obviously, we would love to get out of there in five innings and save pitching and everything, but there’s something to be gained by playing out there a little more and there’s nothing wrong with that,” Guinn said. “(Union County) is a competitive team and they’re a good team and we knew they’d come to battle and they did.” 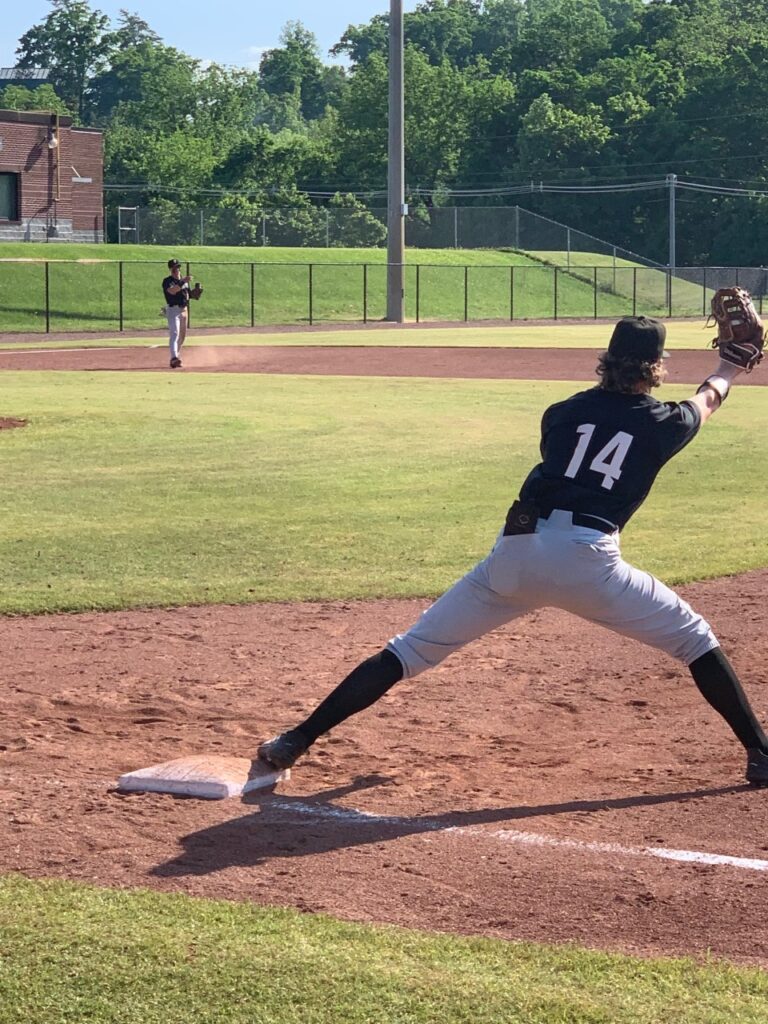 Dylan Loy (14) gets a runner out at first base on a throw by third baseman Trevin Myers. Photo by Brian Hamilton

Franklin earned the win on the mound, going five and two-third innings, allowing two runs on three hits while striking out seven batters. McFall entered the game in relief for one and one-third innings.

Hansen took the loss for Union County, allowing nine runs on nine hits, while striking out four through four and two-thirds innings.

Franklin went 2-for-2 at the plate to lead the Tigers in hits, notching one home run and another sacrifice fly for am RBI. Pigeon Forge did not commit a single effort in the field.

Guinn feels it will give the Pigeon Forge an advantage to host the game at Jack Parton field, where the Tigers have not lost this season.

“We have a great fanbase,” Guinn said. “They’re knowledgeable, they come out and support us and they do a great job. They’re just really supportive and they understand the game and they do come out.”